No Pride In Prejudice: How Singapore’s LGBTQ+ Community Are Still Fighting For Equal Rights

CHIN NGIOK SHUAN attends Pink Dot to find out from the LGBTQ+ community how social stigmas and prejudices affect them and how they are still fighting for equality for themselves.

The Pink Dot event drew large crowds this year and everyone was warmly welcomed by other members of the community as well as volunteers who helped run the show. Photo by Chin Ngiok Shuan. 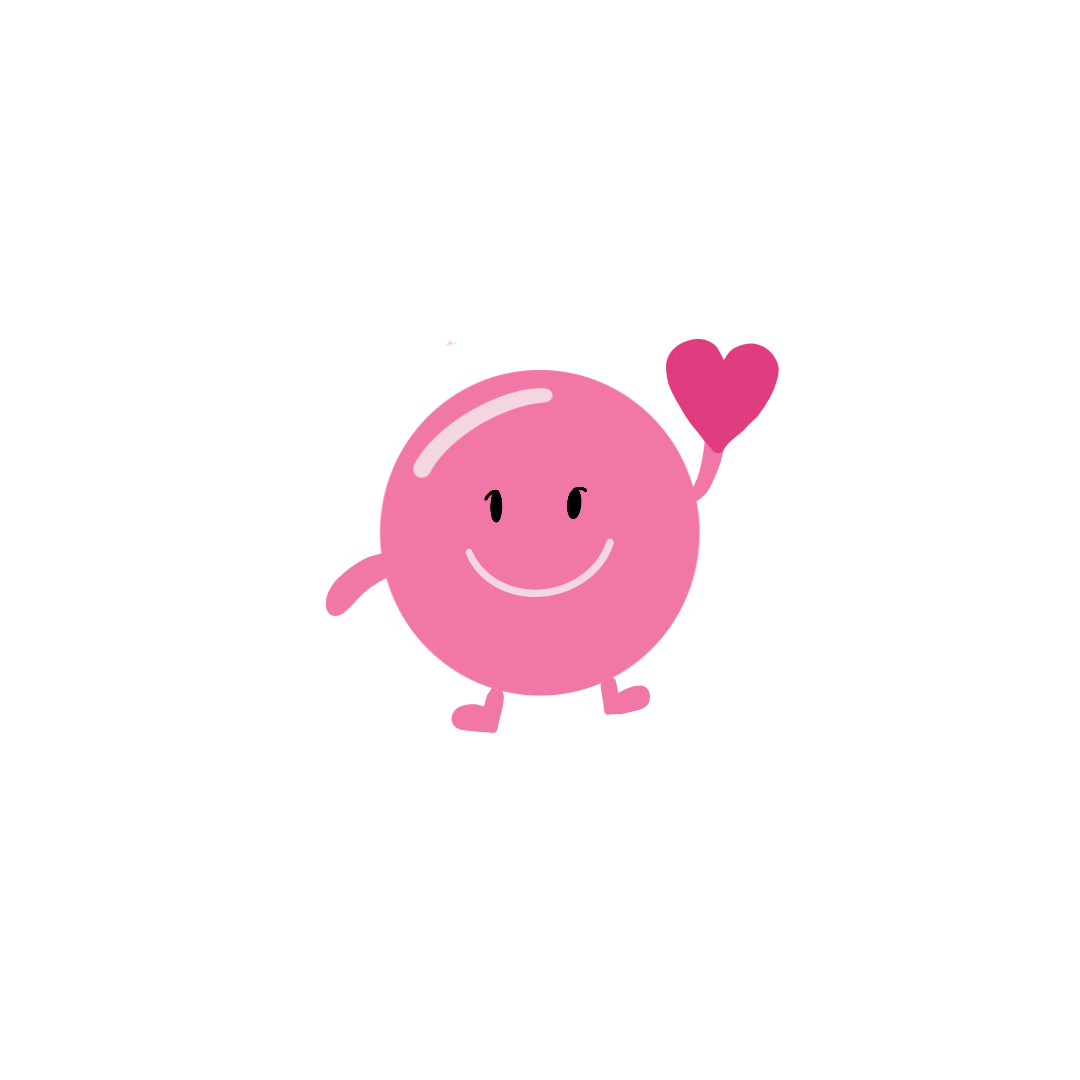 From unequal housing opportunities to laws opposing homosexual couples adopting children, the local Lesbian, Gay, Bisexual, Transgender and Queer (LGBTQ+) community tends to end up with the short end of the stick when it comes to living in Singapore.

Since June is Pride Month, the topic of equality of the LGBTQ+ community in Singapore is once again a hot topic for debate. With other Asian countries such as Taiwan legalising same-sex marriage back in 2019 and Thailand drafting laws that allow homosexual couples rights to adopt children, manage joint assets and liabilities amongst other additional rights, the local LGBTQ+ community is waiting for Singapore to follow in the footsteps of these countries.

Unfortunately, there is still a long way to go for Singapore. While there seems to be a growing support for the queer (defined as ‘relating to, or being a person whose sexual orientation is not heterosexual and/or whose gender identity is not cisgender’, and used in this article as an umbrella term for LGBTQ+) community, there are still many barriers that prevent them from being on equal standing with heterosexual couples in Singapore.

The repeal of section 377A of the Penal Code of Singapore is one example of a barrier. The issue has been widely contested in Singapore, especially within the last couple of years, as the number of supporters for the LGBTQ+ community increase. However, the government has refused to repeal the law even though it is typically unenforced, citing ‘its assessment that society has yet to adequately integrate the opposing views of mainstream conservatives and the homosexual community’, alongside other reasons such as the majority of Singaporeans regarding homosexual behaviour as inappropriate.

The government’s refusal to repeal 377A is not the only deterrent the LGBTQ+ community faces in Singapore. From a lack of community support to the local media restricting homosexual content for those under the age of 16, the seeming absence of support for the queer community is somewhat shocking.

The question remains: When will the LGBTQ+ community be free from the prejudices and stigmas that they face?

With the help of public movements such as Pink Dot, the answer is hopefully, ‘sooner than we expect’. 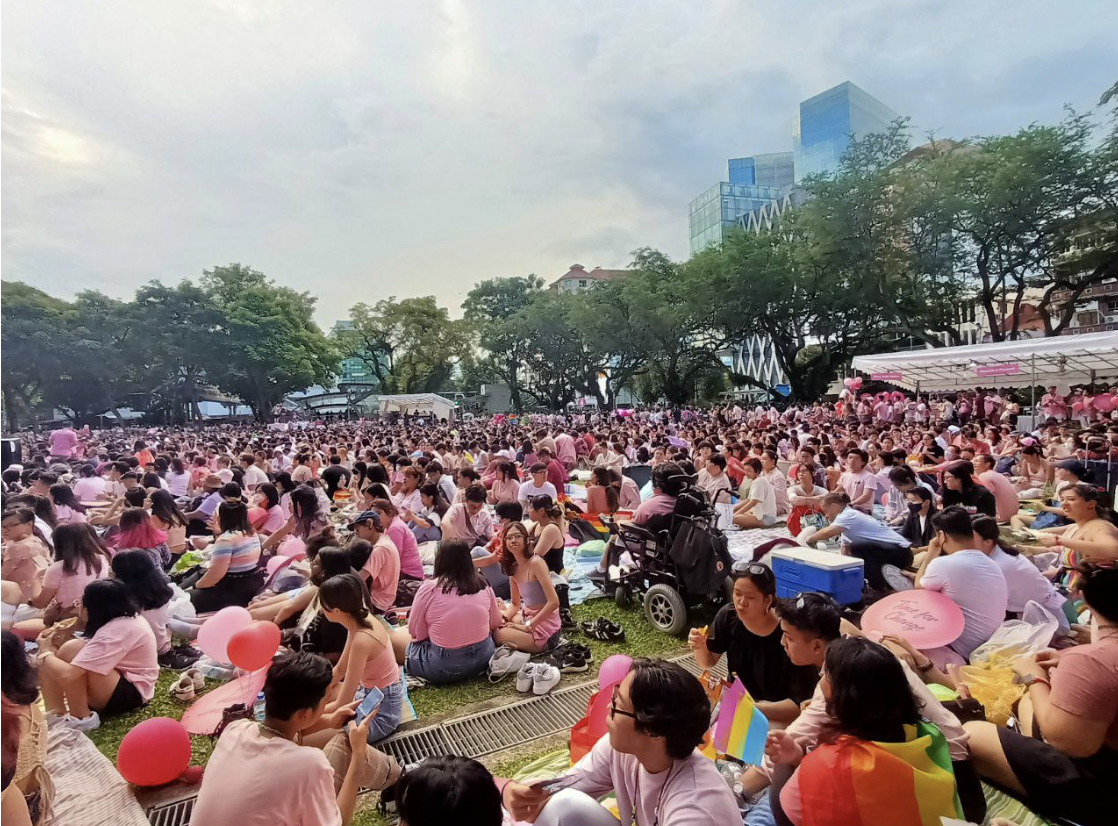 Thousands of attendees braved the sun to show up at this year’s Pink Dot after two years of non-physical events, celebrating each other’s pride. Photo by Chin Ngiok Shuan.

Pink Dot is Singapore’s biggest annual LGBTQ+ Pride movement. Since 2009, members of the local LGBTQ+ community have gathered at Hong Lim Park, where Pink Dot is usually held, to fight for their rights in Singapore. The non-profit group supports the belief that everyone, regardless of identity, gender and sexuality, deserves the freedom to love who they love and they hope to bring queer Singaporeans closer to their loved ones.

“Pink Dot has been my safe space. Every year, I meet so many people just like me who have been shunned by their families and friends just because we don’t identify as straight or cisgender, and we seek comfort in each other, because we can’t get that comfort anywhere else,” says Taylor Hung, 19, who identifies as gay. Cisgender is defined in the dictionary as ‘relating to, or being a person whose gender identity corresponds with the sex the person had or was identified as having at birth.’

“Every year, I meet so many people just like me who have been shunned by their families and friends just because we don’t identify as straight or cisgender, and we seek comfort in each other, because we can’t get that comfort anywhere else,”

Throughout my conversation with Taylor at Pink Dot, he mentioned the different struggles he has had to overcome. These include his estranged ties with his family due to his sexuality and their inability to accept him for who he loves. Additionally, his friends alienated him from their friendship group, and he also noticed that the people around him would mock him for being ‘different’.

Acceptance by their loved ones for who they are is a major struggle the LGBTQ+ community in Singapore faces.

“It’s not that we don’t care about being accepted, it’s just that we have never gotten the acceptance. To fully embrace ourselves, we have to deal with the fact that we’ll never be able to be the person our families and friends wanted us to be, and that we might lose them,” says Taylor.

“But I always believe that if they cannot accept me for who I am and who I love, there will always be others who will. Blood family isn’t always the family you need and sometimes, found family will be the ones who stand by you no matter what.”

“But I always believe that if they cannot accept me for who I am and who I love, there will always be others who will. Blood family isn’t always the family you need and sometimes, found family will be the ones who stand by you no matter what.”

Other than found family, acceptance may come from unexpected sources of strength – allies of the queer community.

These people may be friends or family members of those in the LGBTQ+ community. They may also be individuals who support the movement and offer a consolation to these queer members: They are never alone in their fight for equality. 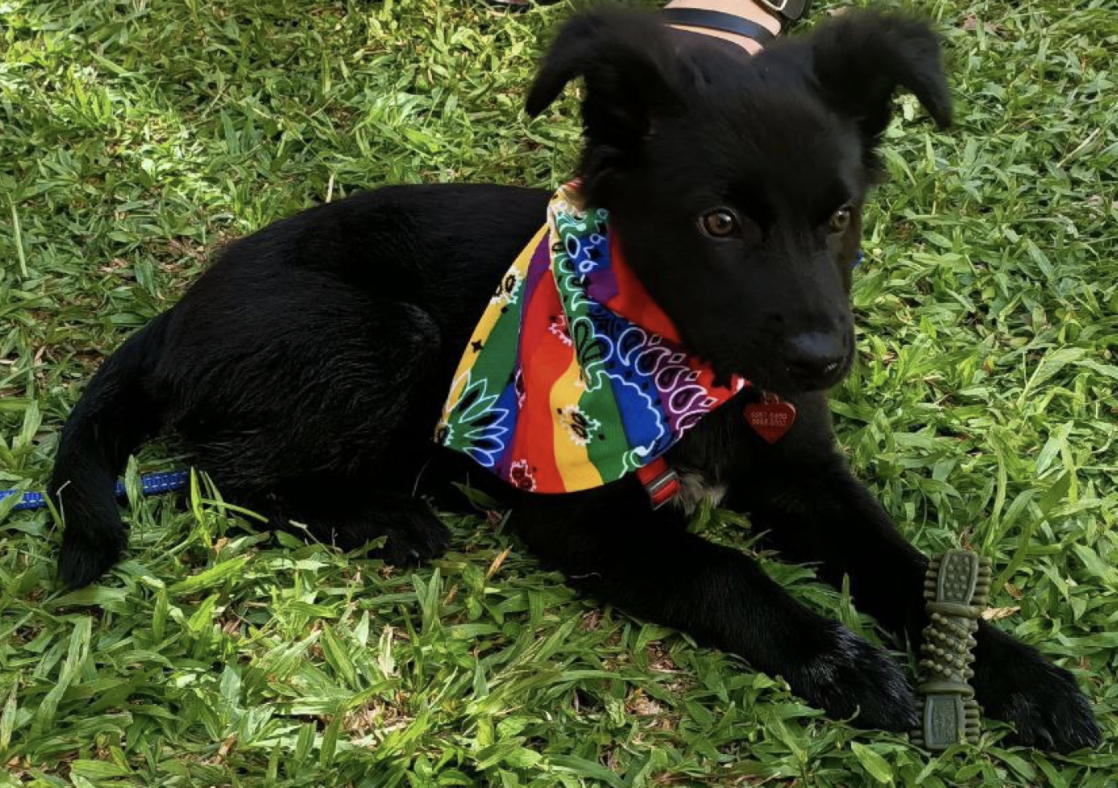 Allies may come in different shapes and sizes and Ponzu, brought by her owner Mr Roman (unpictured), was one of the allies present at Pink Dot. Photo by Chin Ngiok Shuan.

Ms Leah Chia Yi Yang, 29, a transgender woman, says that the stereotypes that she has noticed about being transgender in Singapore are that “most of us are promiscuous, do sex [work] or that we are unnatural” due to their transition from their birth gender to the one they now identify as. “These stigmas affect us in our education and employment,” she adds, indicating that some employers do not want to associate themselves with people from the LGBTQ+ community as they do not support them.

“The one [stigma] I hate the most is when people find out about my sexuality and they come up to me and tell me ‘[you] should go back to church’, or  ‘you’re so beautiful, you’re just wasting your potential’,” says Marie “Changu” Chang, 25, about being pansexual and gender-fluid.

Pansexuality is one of the many sexualities under the LGBTQ+ umbrella and it is defined in the Merriam-Webster dictionary as ‘relating to, or characterised by sexual or romantic attraction that is not limited to people of a particular gender identity or sexual orientation’. On the other hand, gender-fluidity is defined as ‘relating to, or being a person whose gender identity is not fixed’. 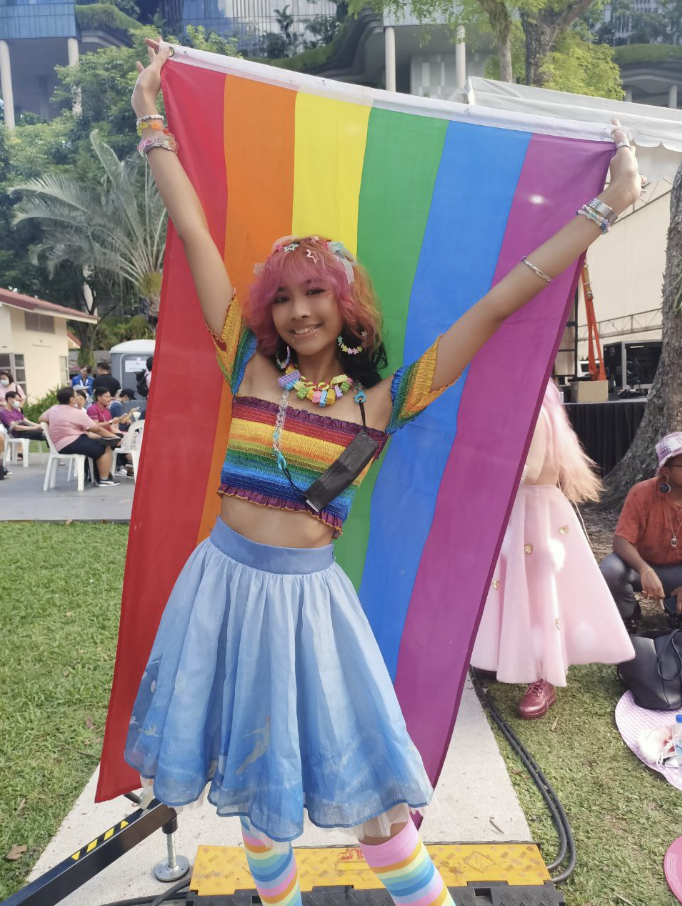 Changu received a lot of attention at this year’s Pink Dot event with their rainbow outfit and bright personality. Photo by Chin Ngiok Shuan.

The troubles with stereotyping and the social stigmas that Taylor, Leah and Changu have faced, are common ones in the community.

With Singapore being a largely conservative nation, it comes as no surprise that the queer community’s fight for equality would be a long, taxing one. Viral instances such as a transgender student in Singapore being denied hormonal therapy by the Ministry of Education even after being diagnosed with gender dysphoria and more recently, the hotel PARKROYAL COLLECTION Pickering’s refusal to host a lesbian wedding, are still all too frequent in Singapore.

However, as time goes by, it’s heartwarming to see that there is a growing trend of people in Singapore supporting same-sex relationships and declining support for Section 377A.

“A personal story of mine is my mother. She [used to oppose] the LGBTQ+ movement and is religious. But recently for some reason, she went to a local drag show and that alone opened up her eyes to the prejudice we face and also how hilarious we can be. After all, we’re still people, just with a little more pizazz,” says Changu.

Although everyone might be facing their own struggles, the fact that they are willing to come together and celebrate their differences with each other regardless of their gender, identity and sexuality, is what makes Pink Dot such a wildly successful and welcoming event for everyone. Video by Chin Ngiok Shuan.

To some local LGTBQ+ members, openly queer Singaporeans are one of the reasons why they are starting to feel more comfortable coming out to the people around them as well.

Leah says that “[openly queer Singaporeans] are helping to improve the public’s impression of the LGBTQ+ community by showing a more diverse representation”.

From W!LD RICE’s founding artistic director Ivan Heng, to local entertainer Kumar, whose works include representation of the queer community, these people have helped change how some locals view the LGBTQ+ community for the better.

“We’re just normal people. There’s no difference between the way we love our friends, our parents and our partners,” says Changu.

In fighting for the marginalised in Singapore, the LGBTQ+ community puts themselves on higher ground, taking the long, winding path to equality for everyone.

“If 377A is repealed, it’s the beginning of a long road to equality, not the end.”  says Mr Choo.

If 377A is repealed, it’s the beginning of a long road to equality, not the end.

While there is still a fair bit of work that needs to be done before equality can be properly achieved for the LGBTQ+ community in Singapore, some believe that a time of change is coming.

“I think everyone should be allowed to love who they want to love. The LGBTQ+ community is such a small percentage of citizens in Singapore. I just think every one should have the rights to have a home, be it gay, straight or [bisexual],” says Changu.

“All we ask for is to be treated the same.” 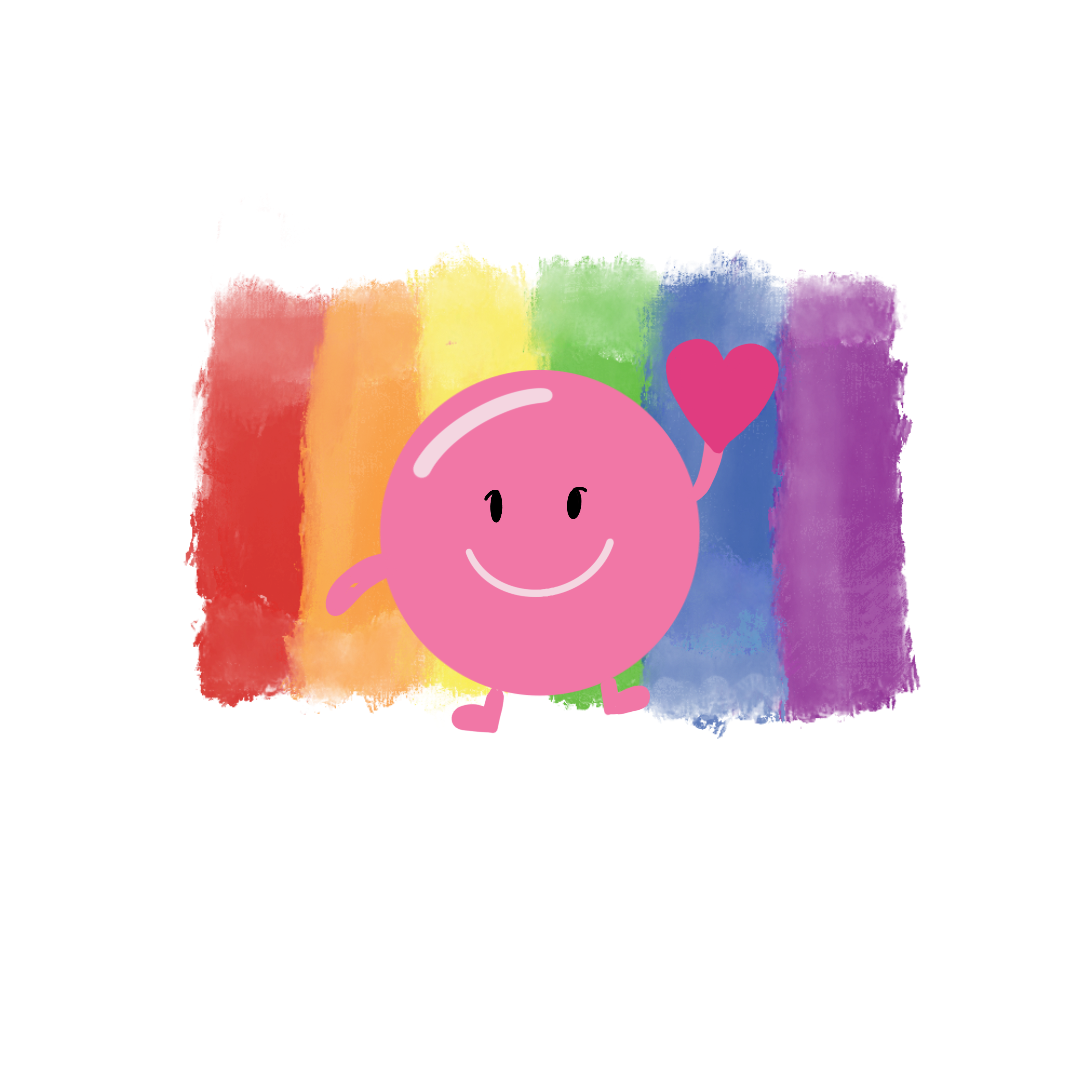 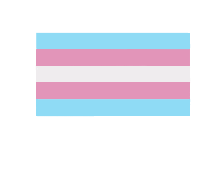 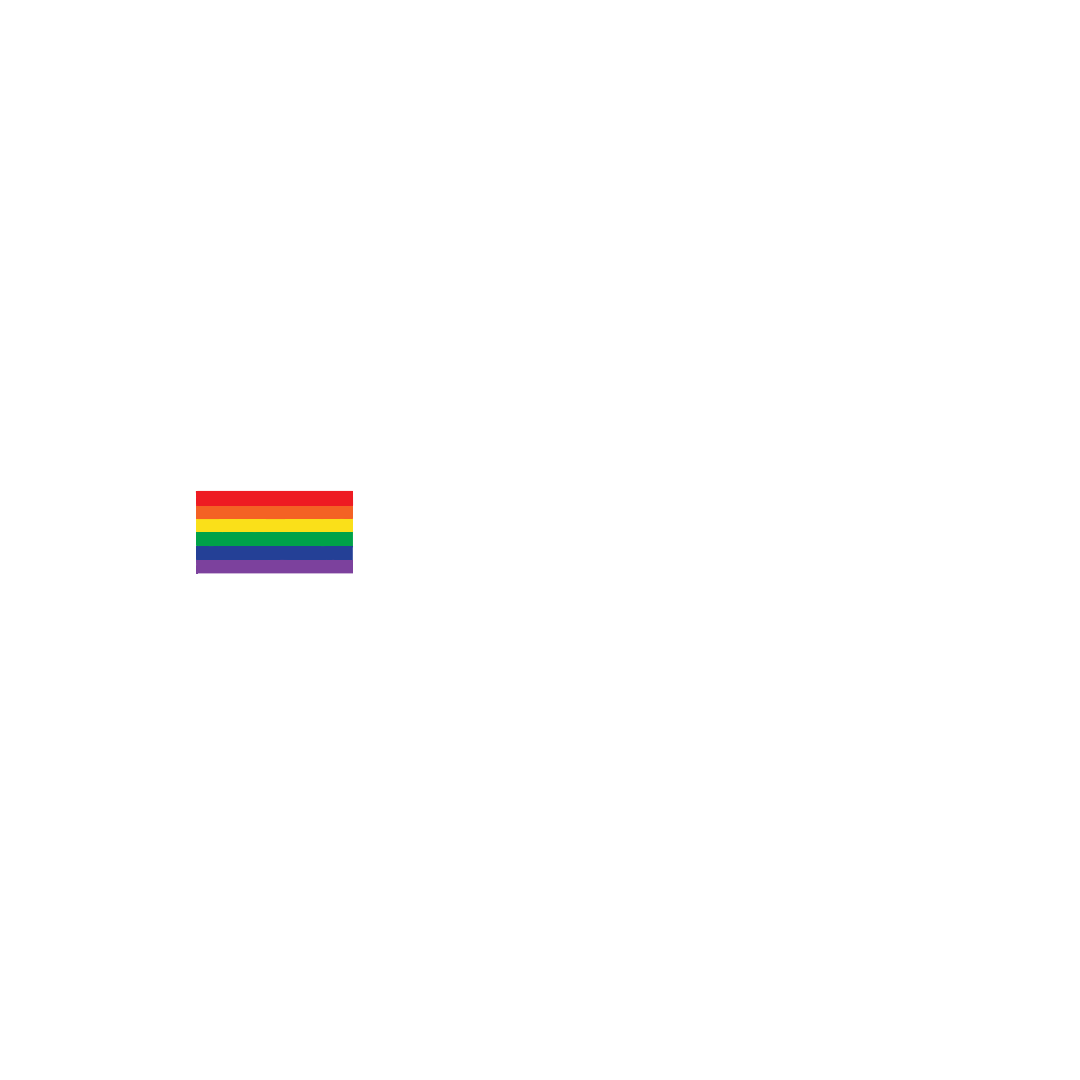