Some believe it’s a myth, yet others have gone through the implications of Middle-Child Syndrome firsthand. Htet Htet Nay Aung explores how this syndrome has affected the childhood and development of youths.

Middle-Child Syndrome, despite not being an official medical diagnosis, has heavily impacted the lives of many middle children. Photo by Htet Htet Nay Aung.

If you’ve ever found yourself relating to Edmund from The Chronicles of Narnia or Alex Dunphy from Modern Family, congratulations! You might have experienced something called Middle-Child Syndrome. 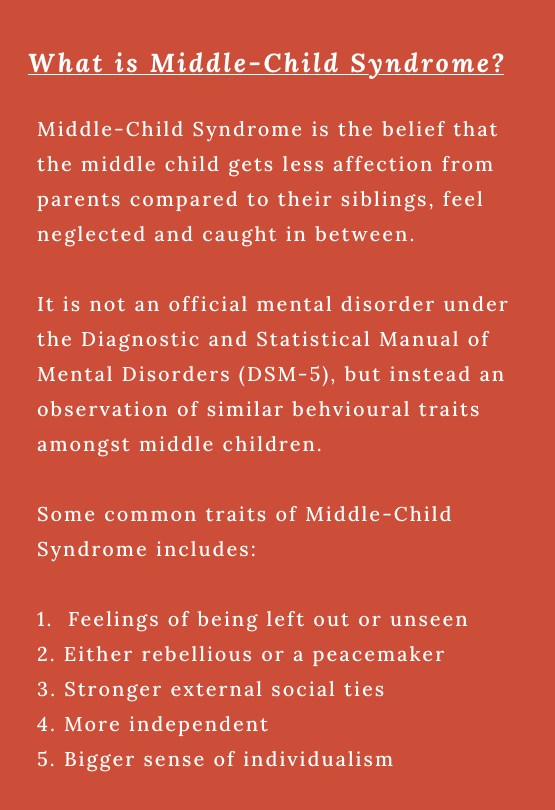 Alfred Alder, a 20th century psychologist, had a theory that the birth order of children correlates closely with their development and personality. He believed that the middle child often gets overshadowed by or are more neglected compared to their older and younger siblings.

According to this theory, he stated that although children may be brought up in the same environment with the same teachings, their birth order could heavily influence their individual experience and personality. 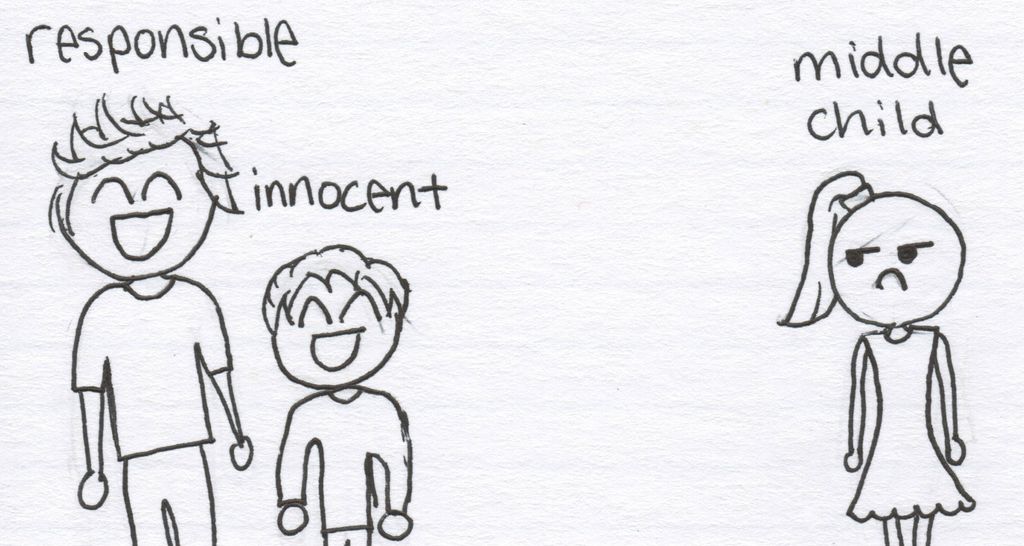 While the oldest is deemed the “golden child” and the youngest gets pampered the most, the middle child is often neglected in the process, with nowhere to fit in. Photo taken from Wrytin.

Since Middle-Child Syndrome is not an official medical diagnosis but instead a study of behavioural patterns over the years, it is not hard for people to express scepticism towards it.

“Middle-Child Syndrome is not a mental condition under the Diagnostic and Statistical Manual of Mental Disorders (DSM-5), and is currently listed as a hypothetical condition by the American Psychological Association (APA),” says Mr Maximillian Chen, a clinical psychologist in Singapore.

However, individual experiences can differ. For middle children who have had a first class seat to this experience growing up, explanatory articles and countless studies on the internet may never do them justice.

“It’s not that I didn’t feel loved but I always saw that my siblings got [loved] more,” says James Koh, 22.

It’s not that I didn’t feel loved but I always saw that my siblings got [loved] more.
- James Koh, 22 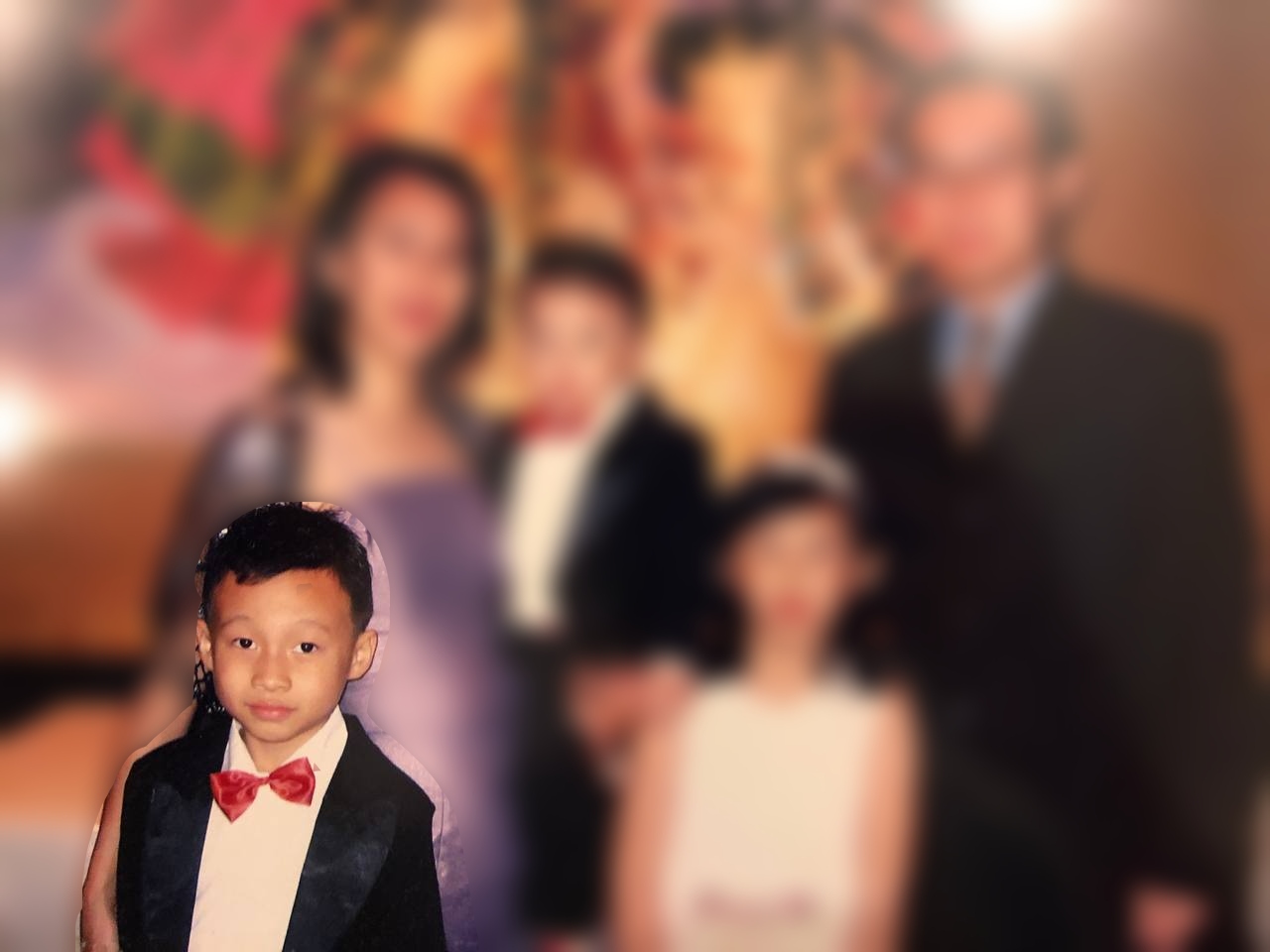 James (bottom left) always felt that his older sister and younger brother got more attention than him, which left him wondering why on many occasions. Photo courtesy of James.

While his sister was crowned as the family’s smart, “perfect” first child and his brother, the most doted upon, James always felt like he had no place in the family growing up.

“One thing that really angered me when I was younger was that I saw there was only a picture of my sister and brother in my mom’s room,” he recalls.

Middle children often struggle with the feeling of being neglected as they feel the amount of attention and love they receive from their parents always falls short as compared to their siblings.

According to prior research and observations, Mr Chen points out that “youths with Middle-Child Syndrome may tend towards being rebellious to get more attention”, however some of them may also tend to be “the peacemaker in relationships and display more people-pleasing behaviours”.

James was undoubtedly the former as the feeling of inferiority, self doubt and rebellion started at a young age for James. 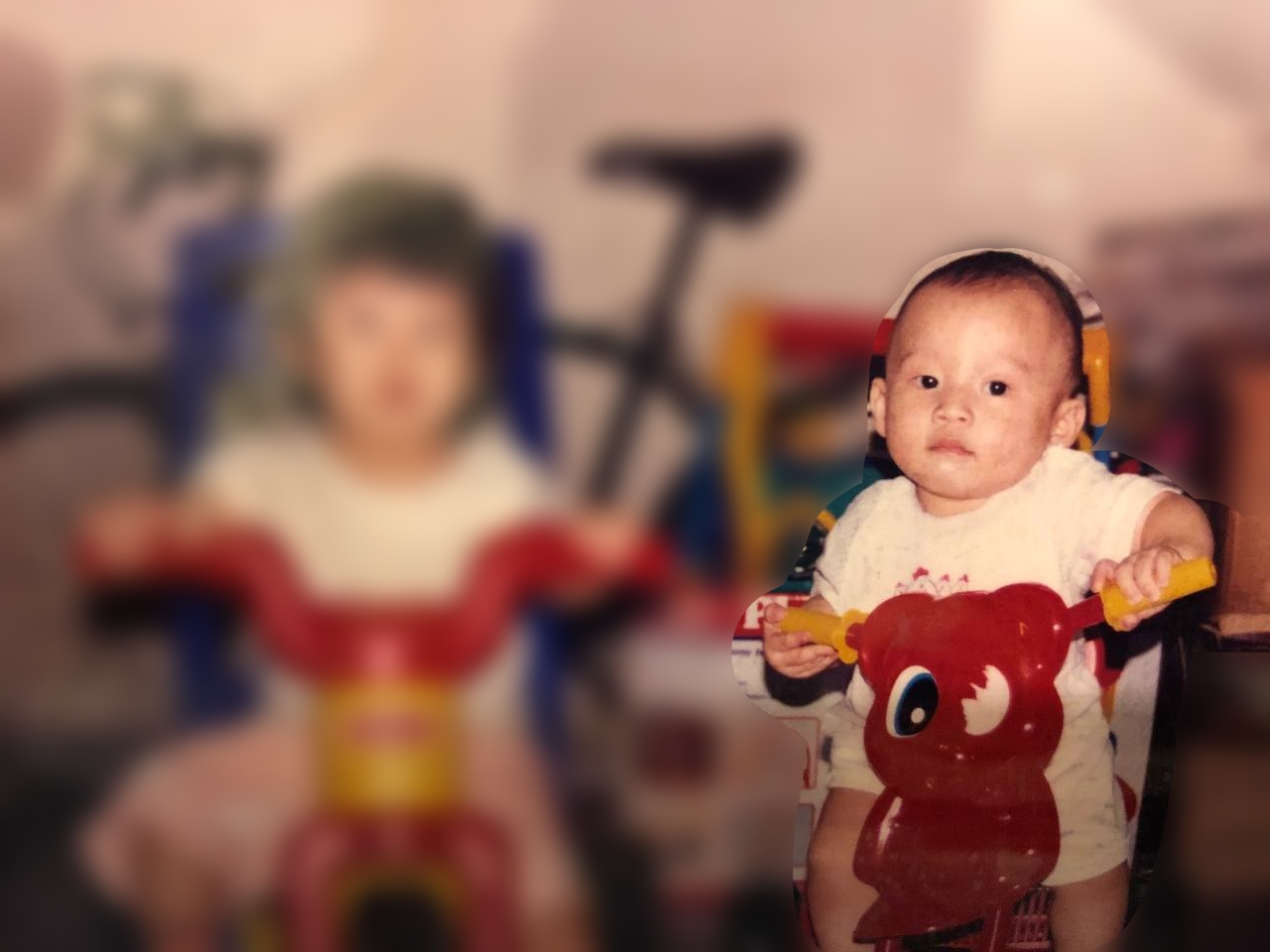 James (right) recalled feeling like his achievements and behaviour were only subpar to his older sister (left). Photo courtesy of James.

His older sister and younger brother both got into the Express stream in secondary school while he made it to the Normal Academic (NA) stream. It often led him to wonder if his pace of learning was the result of not being given the same amount of attention and opportunities to take part in their family outings.

While he was stuck in endless tuition classes, his siblings had multiple opportunities to bond with their parents during family activities which he was not a part of.

Although the possibility that all of this could have been coincidental as his parents claimed that “they love everyone equally”, young James could not escape the heavy weight of feeling like he “had to prove to [his] parents that [he] was good enough”.

Due to this pattern of exclusion and lack of attention, many middle children start to seek comfort in other social circles, particularly their friends. 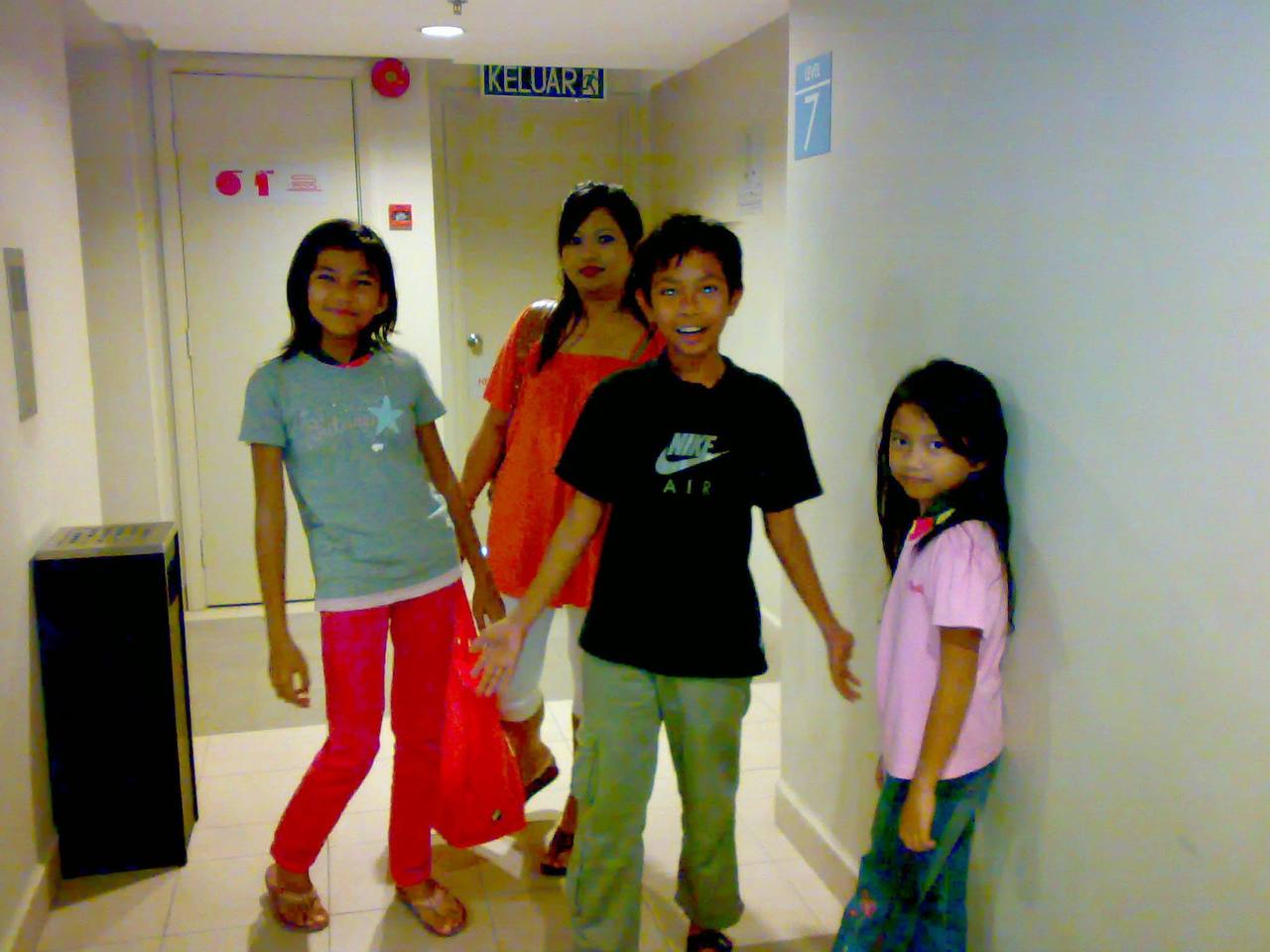 Norish Khairina (extreme left) started noticing the common characteristics of children who have middle child syndrome in herself and those around her. Photo courtesy of Norish.

Similarly, Norish Khairina, 23, found herself in a similar situation as the black sheep of the family.

“My brother always got away with most things, maybe it is because he is the first child, the obedient child; and my sister has never been beaten by my parents before… I felt like no one in the family got me,” says Norish.

My brother always got away with most things, maybe it is because he is the first child, the obedient child; and my sister has never been beaten by my parents before… I felt like no one in the family got me.
- Norish Khairina, 23

The term ‘middle child syndrome’ was never foreign to Norish as the similarities between her and other middle children in her family were always brought up during gatherings. 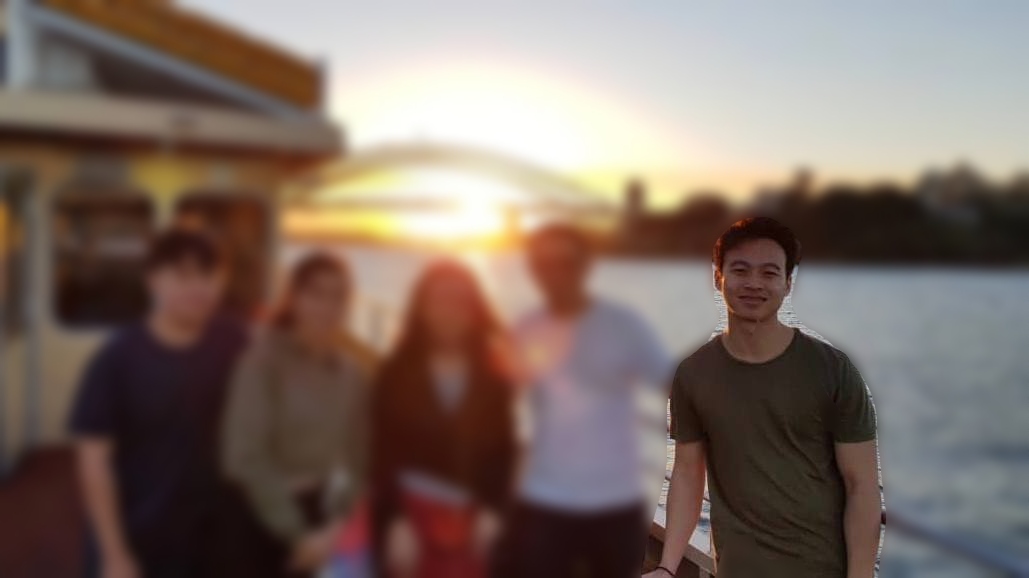 James (extreme right) stayed behind in Singapore alone for a year as a teenager while his older sister and younger brother lived with their mother in Melbourne, Australia. Photo courtesy of James.
“In my mom and dad’s perspective, I’m the guy who doesn’t want to spend time with the family… But I feel like it’s because they didn’t give me the chance to,” says James. 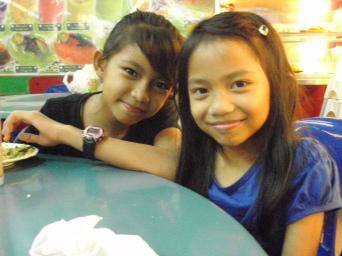 Norish (right) would make an effort to spend time with her family even though she was more comfortable hanging out with her friends as her family fostered a family-oriented culture. Photo courtesy of Norish.

As compared to her siblings who were more comfortable around her family, Norish always kept her problems and feelings to herself as she was afraid that “it would backfire when they don’t get it”, furthering the belief that she was the root cause of all of the issues in the family.

Paired with her non-confrontational attitude, Norish found it difficult to speak up for herself and find a voice in the family which often resulted in her hiding in her room, away from everyone else.

“These behaviours can be displayed by others who are not middle children as well. The evidence behind the existence of middle child syndrome is still ambiguous,” Mr Chen points out, saying that he has dealt with youths who exhibit similar behaviours to Norish and James. 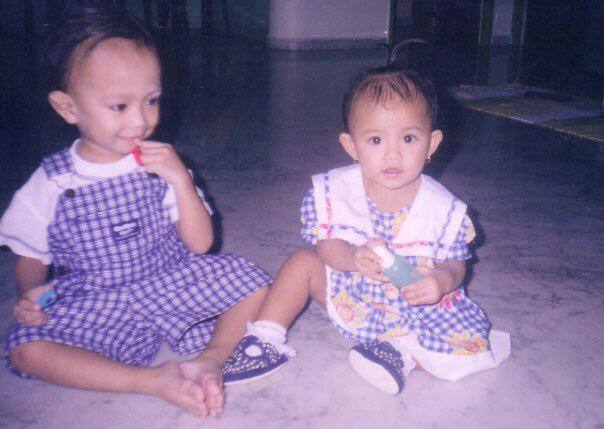 Unlike her siblings, Norish (right) has never been one to open up to her parents and build a stronger bond. Photo courtesy of Norish.

“I used to get upset when I was younger because I felt like my family didn’t love me… But as I grew up, I kinda got used to it and no longer get upset over it,” says Norish.

As an early childhood educator, Norish has found a deeper understanding of this phenomenon, as well as herself. Norish easily falls into the common category of being the “peacemaker” amongst middle children and feels fine where she is, even if her family thinks otherwise.

Today, James has made peace with the rebellious and angry inner child in him and has accepted the abundant independence and resilience that he has developed over the years.

Although his experience may have been rougher than those of his siblings’, he believes that this journey has heavily influenced the person he has become.

As young adults, both James and Norish have come to terms with the emotions and troubles they dealt with during their childhood and have simply gotten “used to it”.

But does this mean that the implications stop there? Unquestionably not. Whether or not their birth order had any influence on their personalities in adulthood, the experience that they’ve had over the years has shaped who they are today, for better or for worse.

“While being a middle child can have a significant impact on one’s development or personality, this impact can either be positive or negative,” says Mr Chen.

While being a middle child can have a significant impact on one’s development or personality, this impact can either be positive or negative.

Positive and negative personality traits can be very subjective. However, like many other middle children out there, James and Norish have discovered very intricate and uplifting parts of their personalities as they stepped into adulthood. 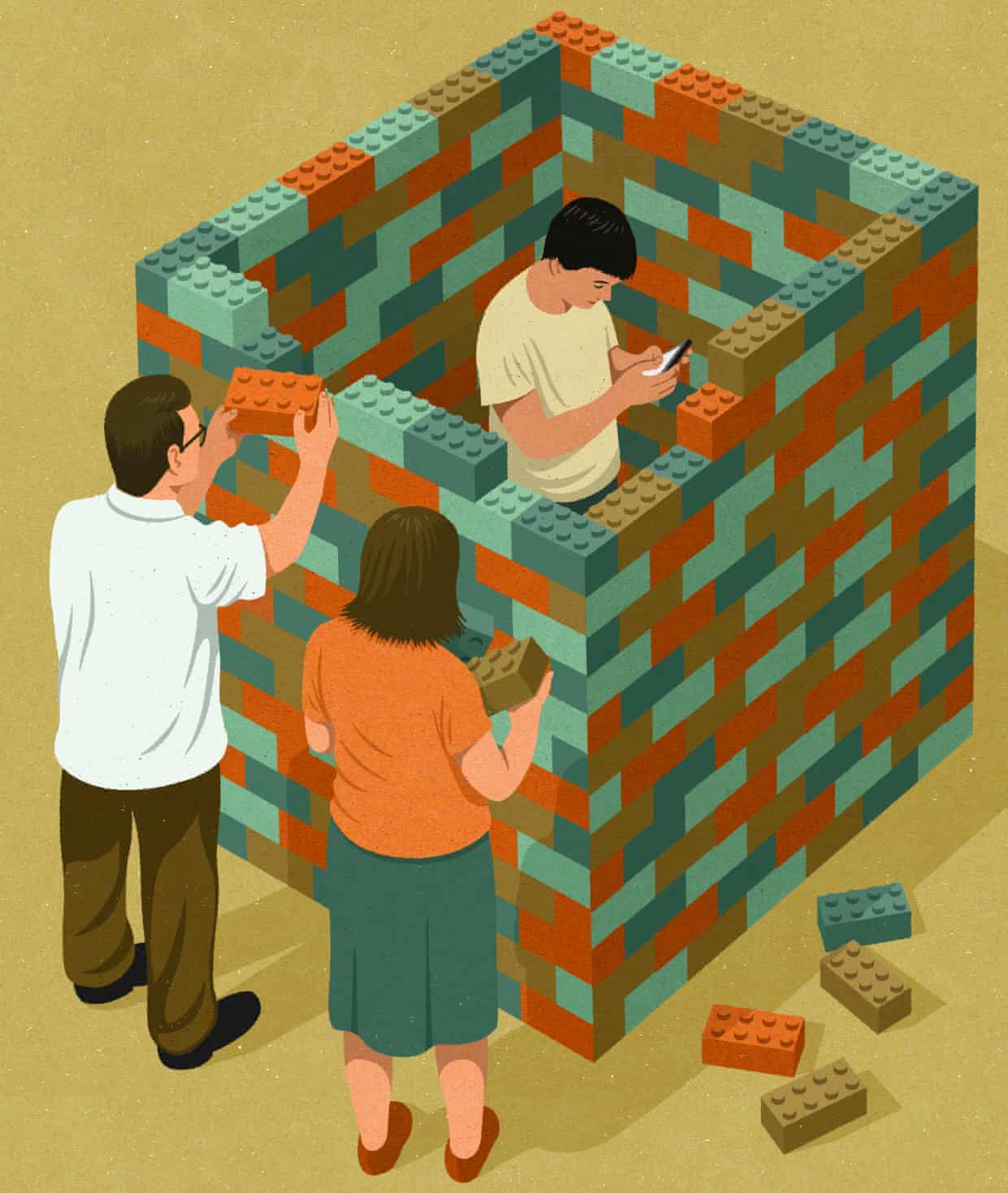 Parents may sometimes be too focused on the negative traits in middle children that they might forget to evaluate the causes behind such behaviour. Photo taken from The Guardian.

There are always two sides to the same coin. Are children to blame for acting out because they are unable to handle the complexity of certain situations? Or should parents be more aware of how their actions affect the upbringing and development of their child?

“I think parents tend to focus a lot on their child’s unwanted behaviour and try to fix it through scolding or punishments. Parents are not often aware of the factors that can contribute to their children’s negative behaviours, such as parenting styles and birth order,” say Mr Chen.

I think parents tend to focus a lot on their child’s unwanted behaviour and try to fix it through scolding or punishments. Parents are not often aware of the factors that can contribute to their children’s negative behaviours, such as parenting styles and birth order.
- Mr Maximillian Chen

Due to this, many parents fail to take a step back and look at the bigger picture: the cause and effect of their actions and words. While many are aware of Middle-Child Syndrome and its complications, they simply do not believe in it.

“I wish my parents would have just acknowledged what I was going through; it would have made me feel a lot better about myself,” says James.

Although Middle-Child Syndrome and birth order aren’t the main factors contributing to how a child develops, the experiences that they go through plays a huge role, and so do their parents.

In order to work on a relationship between a middle child and their parent, effort is needed from both parties to understand each other better and to patch up past wounds. Acknowledging the child’s emotions and experiences could form a bridge that helps many middle children to express their feelings fearlessly, and eventually might put them at peace with their families and inner child.