The need for social interaction is crucial, especially in a global pandemic. Sasha Ling explores the role parasocial relationships play in the COVID-19 pandemic and how online interactions have evolved with the rise of livestreaming.

The increased time spent in isolation amid the COVID-19 pandemic emphasised humanity’s need for connection. Coupled with a spotlight on self-made content such as livestreams, the pandemic has become the perfect breeding ground for parasocial activity.

What Are Parasocial Relationships?

Parasocial relationships refer to the one-sided psychological bond a person has with a media persona or a person known only through the Internet.

The concept of parasocial relationships is far from new: the term was coined in the 1950s to refer to the psychological relationship between an audience member and TV performers or radio DJs.

The widened potential of online interaction has deepened the illusion that people can foster an intimate relationship with their favourite celebrity or media persona based on their online presence and interaction.

It might seem absurd to have an emotional connection to a person on the Internet, but this social phenomenon is actually deeply rooted in our human nature. Humans are naturally wired to seek and form relationships with others.

Viewers who have a favourite livestreamer often feel like they know them in real-life. Screenshot taken from Twitter.

With online interactions surfacing only in the past decade or so, we have not yet evolved to distinguish between a face we see in real-life and a face we see online. This results in similar feelings of connection with a person we know in real-life also emerging with an online persona, even though we might not be interacting with them in person.

This results in similar feelings of connection with a person we know in real-life also emerging with an online persona, even though we might not be interacting with them in person. 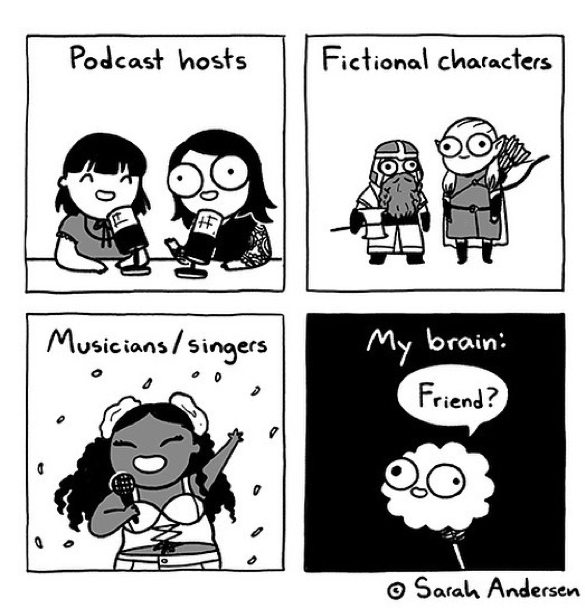 Feeling elated when the football team you support wins a match or distressed when your favourite TV show character gets killed off are examples of emotional responses to parasocial connections we form with a persona whom we do not interact with or know personally.

Joshua Goh, 19, a viewer of music livestreams on Twitch and YouTube, says: “If a day comes when a musician streamer I watch releases their own song or signs to a record label, naturally I’ll feel proud of them because I have watched them grow since they were small, and now they have reached a certain milestone.”

Parasocial Relationships, a Global Pandemic and the Livestreaming Boom 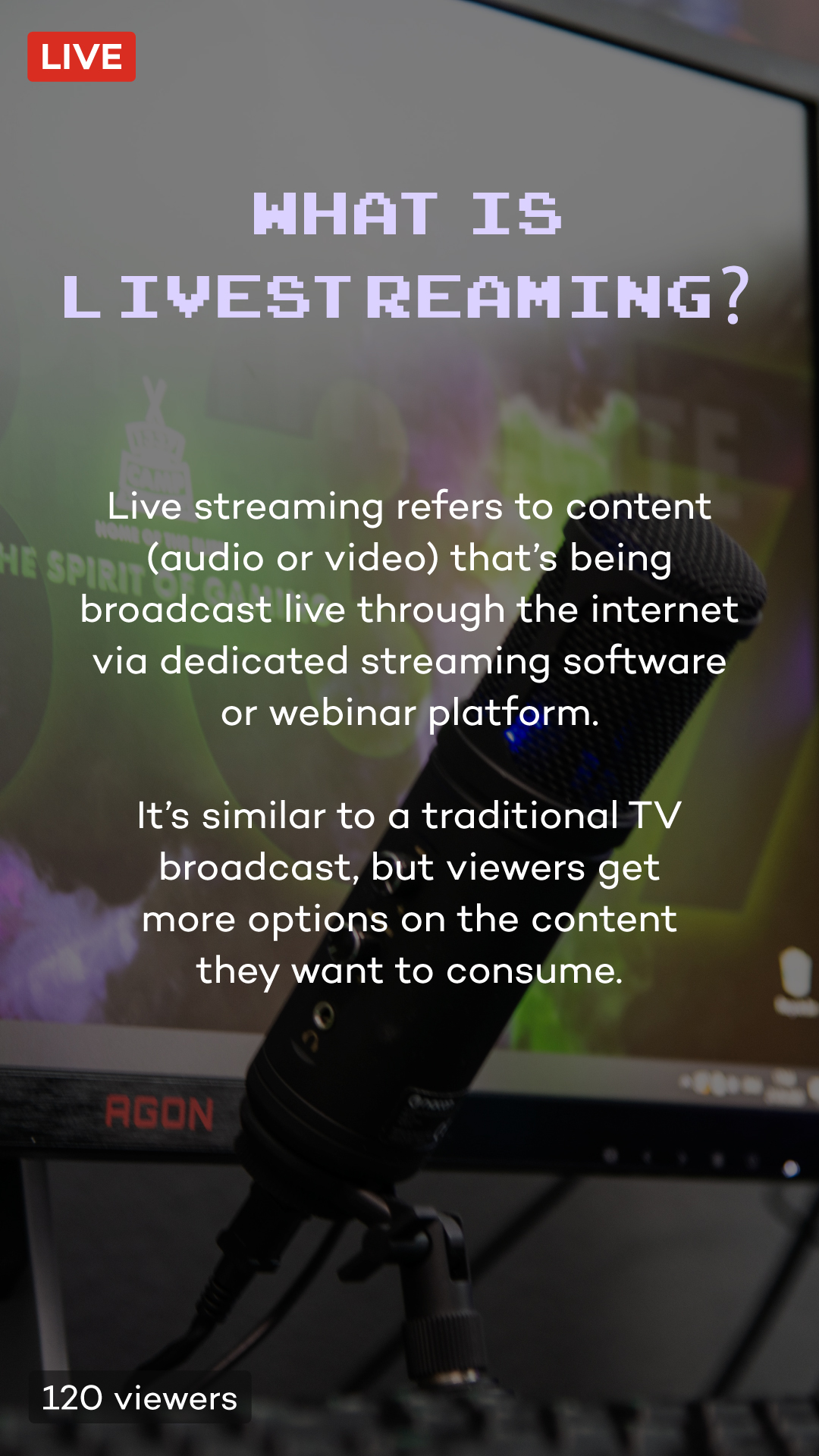 Parasocial activity thrives in the livestreaming scene, where the interaction between a livestreamer and their viewers is much more personable and intimate as compared to other forms of media content, like a pre-recorded vlog with high production value.

Similarly, other live video platforms have seen significant growth during the pandemic. As of the third quarter of 2021, Facebook Gaming boasts 521 million watched hours, which is a 61 per cent year-on-year increase.

In Singapore, the livestreaming app Bigo Live was the biggest mobile app in terms of consumer spending in 2020. On platforms like Twitch, viewers can interact freely with the streamer or other viewers through the live chat.

Livestreamers, although only an online persona, are able to respond to viewers directly as if they are on a facetime call with a friend or family member. This blurs the line between an online streamer and an actual friend.

With typical livestreams lasting as long as three to twelve hours, viewers who spend a great amount of time watching and interacting with a streamer might naturally start to consider them as their friend, despite never having met them in person before.

The emotional engagement rate for live content has been found to be a whopping 25 per cent, which is a much higher figure compared to on-demand viewing (17 per cent).

Livestreaming is so attractive because of the transactional interactions through the chat function, which is a step-up from traditional video content.

Joshua says: “The appeal of watching livestreams is that when streamers interact with their audience, it’s like they are interacting with you in real time, it isn’t scripted or anything. I think one of the most important things about livestreaming is the interaction with the audience through the chat because that is what separates it from traditional video content like YouTube videos.”

The appeal of watching livestreams is that when streamers interact with their audience, it’s like they are interacting with you in real time, it isn’t scripted or anything. I think one of the most important things about livestreaming is the interaction with the audience through the chat because that is what separates it from traditional video content like YouTube videos. 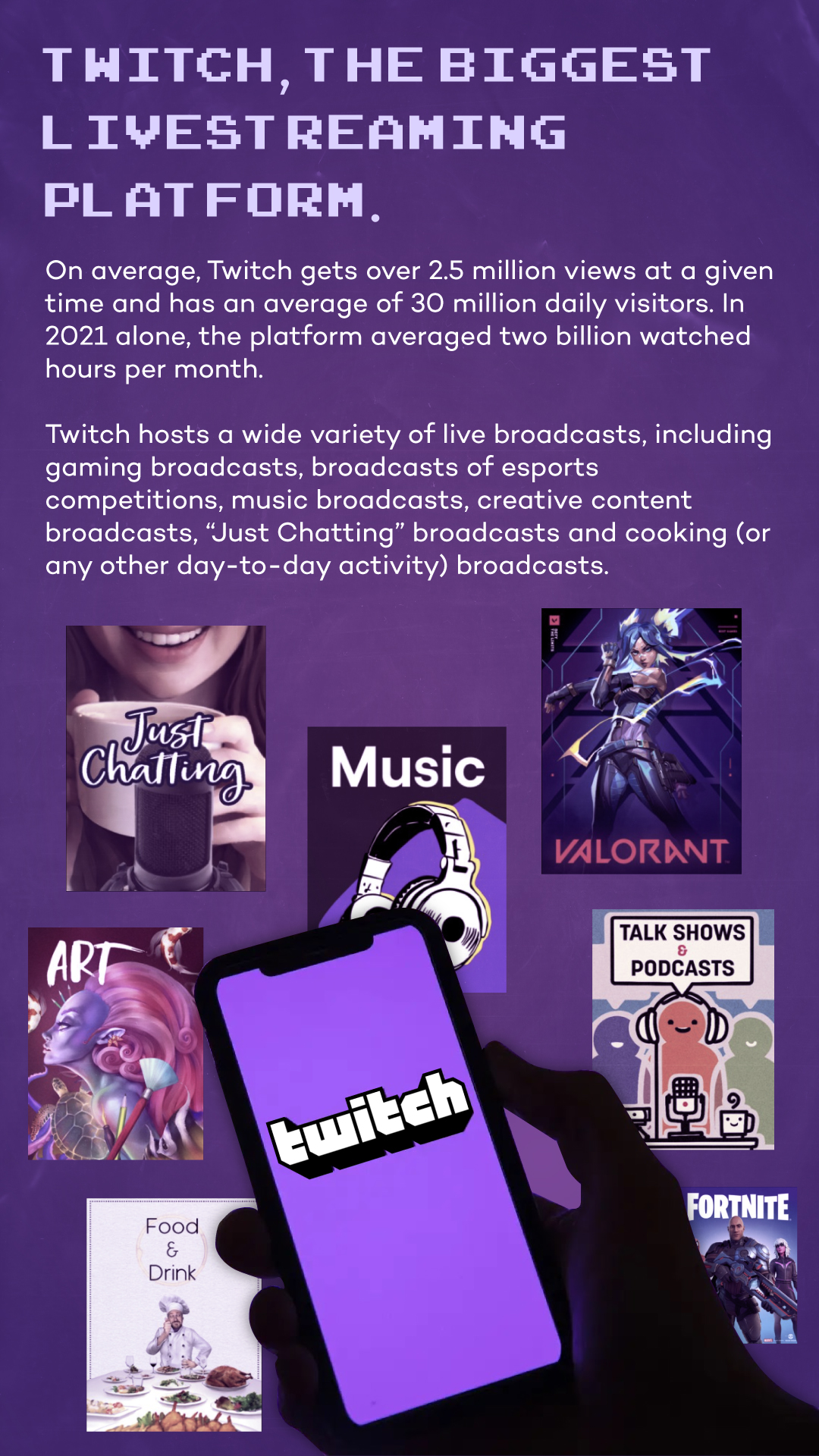 The various categories of content broadcasted live on Twitch. Screenshot taken from Twitch.

The “Just Chatting” category on Twitch includes broadcasts where streamers can talk about any topic or simply interact with their viewers in the chat.

There are also broadcasts where streamers engage in activities that range from painting to sleeping, with minimal to no talking at all.

This genre of livestreams is a form of entertainment that is most similar to in-person interaction, where streamers engage with their viewers in a more immediate and genuine way compared to other types of media content which are typically edited and one-sided, with fewer opportunities to break the fourth wall.

The nature of parasocial relationships has the potential to become two-way in the context of livestreams, which provides a level of intimacy that closely mimics a real-life relationship.

The nature of parasocial relationships has the potential to become two-way in the context of livestreams, which provides a level of intimacy that closely mimics a real-life relationship. 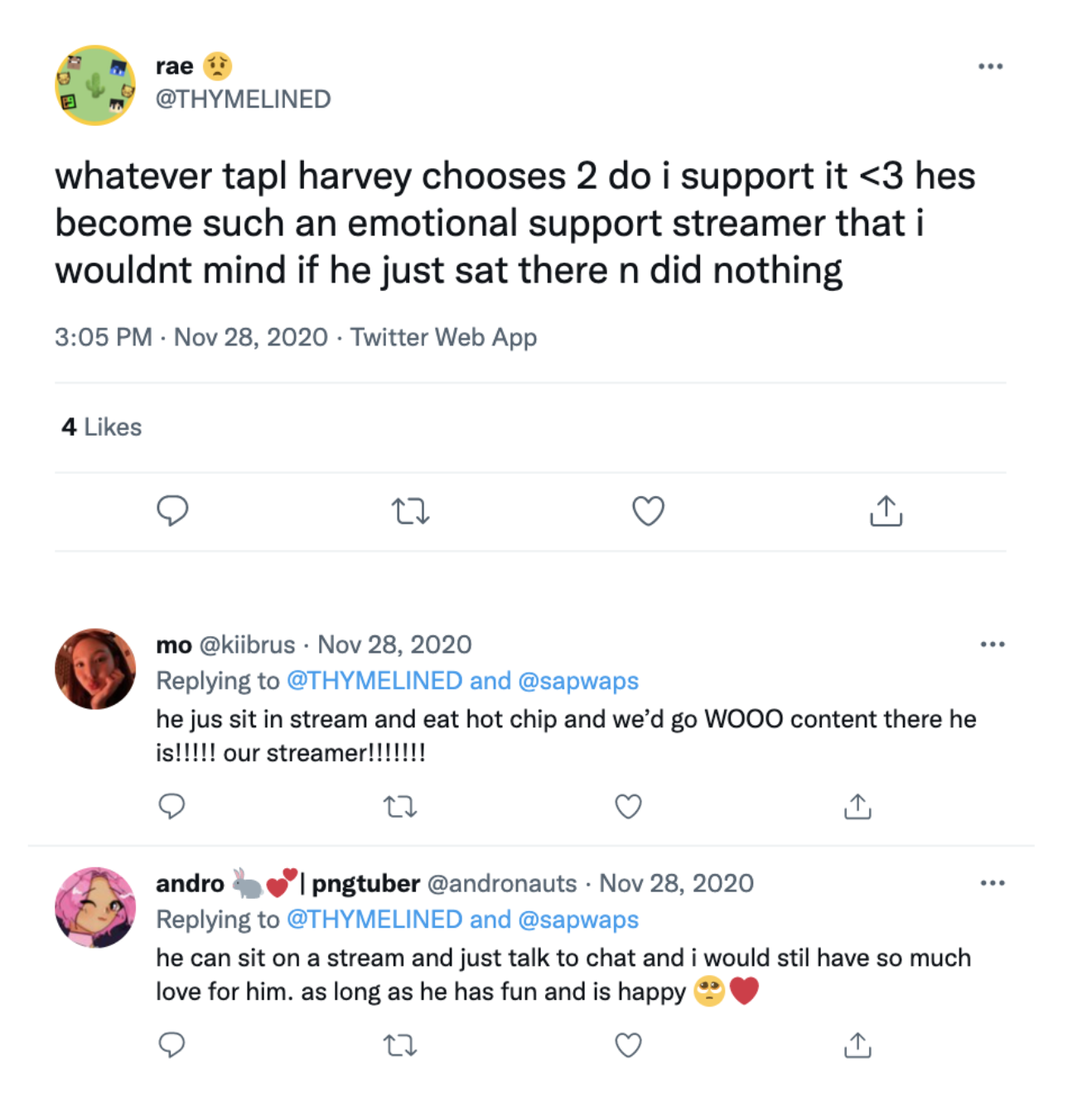 The parasocial connection with the streamer is what keeps viewers watching, not necessarily the content. Screenshot taken from Twitter.

In fact, the success of a streamer might largely depend on their personality and how adept they are at interacting with their viewers.

“The streamer’s personality is quite an important factor when watching a stream. Some people prefer streamers who have very big personalities and are very loud. Personally, I prefer a streamer that is more chill and toned-down, but not someone who doesn’t interact with their audience at all,” Joshua says.

“If the streamer has an unlikeable personality, nobody is going to watch them. There are many streamers streaming the same type of content, with the same or even higher skill level. Most streams can last for seven to ten hours, so if the streamer wants people to watch even a fraction of that time, they have to be likeable and have audience interaction. I wouldn’t sit there and watch someone if there’s nothing I like about his or her personality,” he adds.

The Pros and Cons of Parasocial Relationships

Parasocial influence may be positive or negative depending on whether the parasocial relationship with the online persona is healthy.

Although the phenomenon is usually looked down upon, engaging moderately in parasocial activity is completely normal and serves a number of benefits.

Parasocial connections are found to increase one’s self-confidence and result in stronger feelings of belonging, especially when we feel isolated and lonely.

These relationships can also be instrumental to youths who are exploring their interests and are looking for a community that they can relate to. Youths who lack a safe environment or space with the people in their lives can turn towards these online relationships for support.

The COVID-19 pandemic has undoubtedly exacerbated the need for social interaction. Not having in-person interactions for increased periods of time has inevitably evoked feelings of loneliness and a lack of genuine human connection in people.

This raised the importance of the social role online media personas can play. Just like real-life friendships, we can use parasocial relationships to improve our mood and boost our confidence or to fulfil our innate human need for social connection.

Parasocial relationships can be a diversion from difficulties in life. Screenshot taken from Twitter. 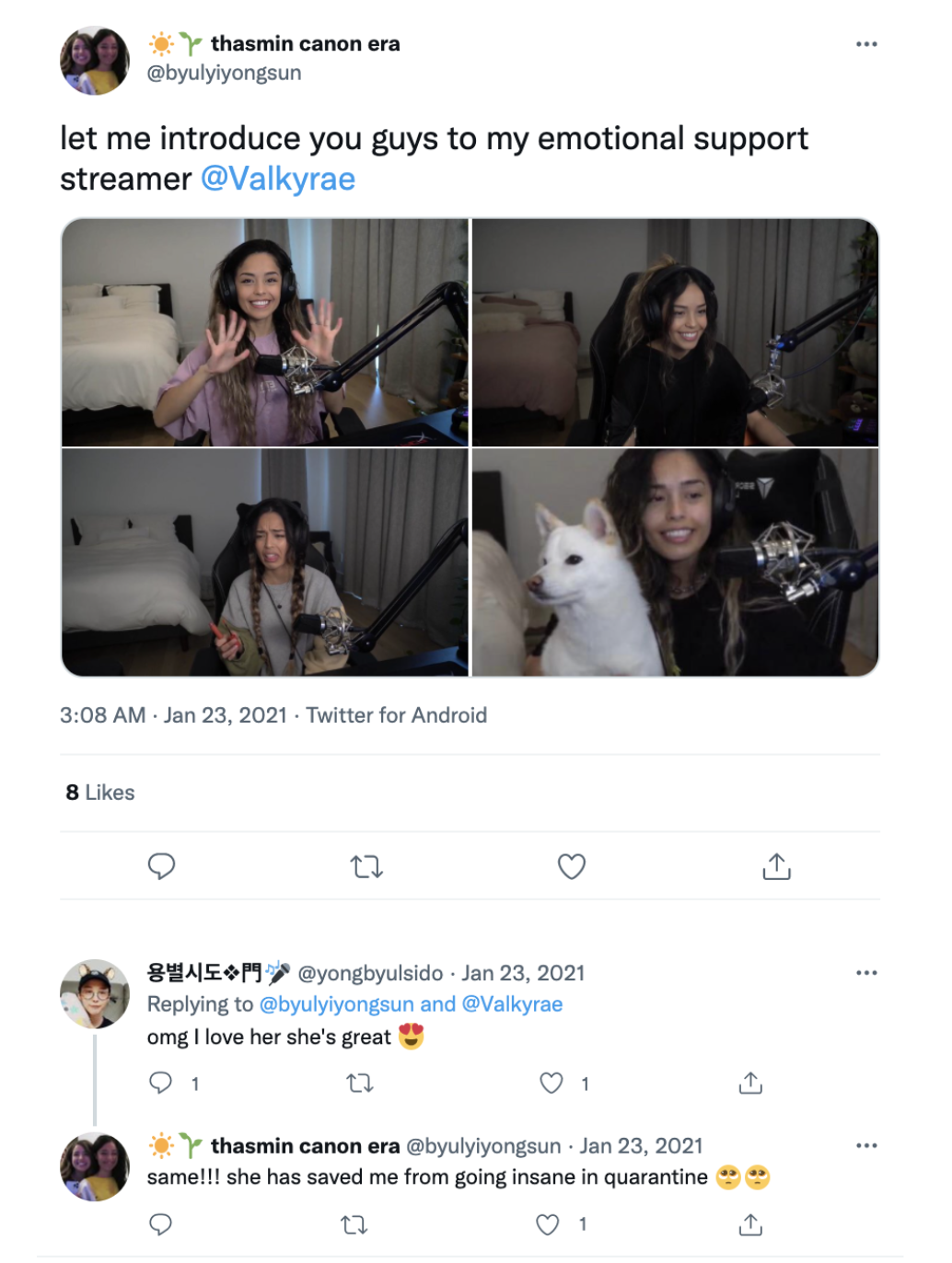 Online media personas can be comforting in times of loneliness or challenging situations. Screenshot taken from Twitter.

However, parasocial relationships can also turn into unhealthy attachments.

Having an unhealthy parasocial connection to an online persona may cause one to feel negatively affected by the persona’s actions or life circumstances which should normally not concern them, as they are not directly involved in their lives.

If parasocial relationships entirely replace one’s in-person relationships, it can also lead to feelings of emptiness and emotional distress when the persona is not active online. 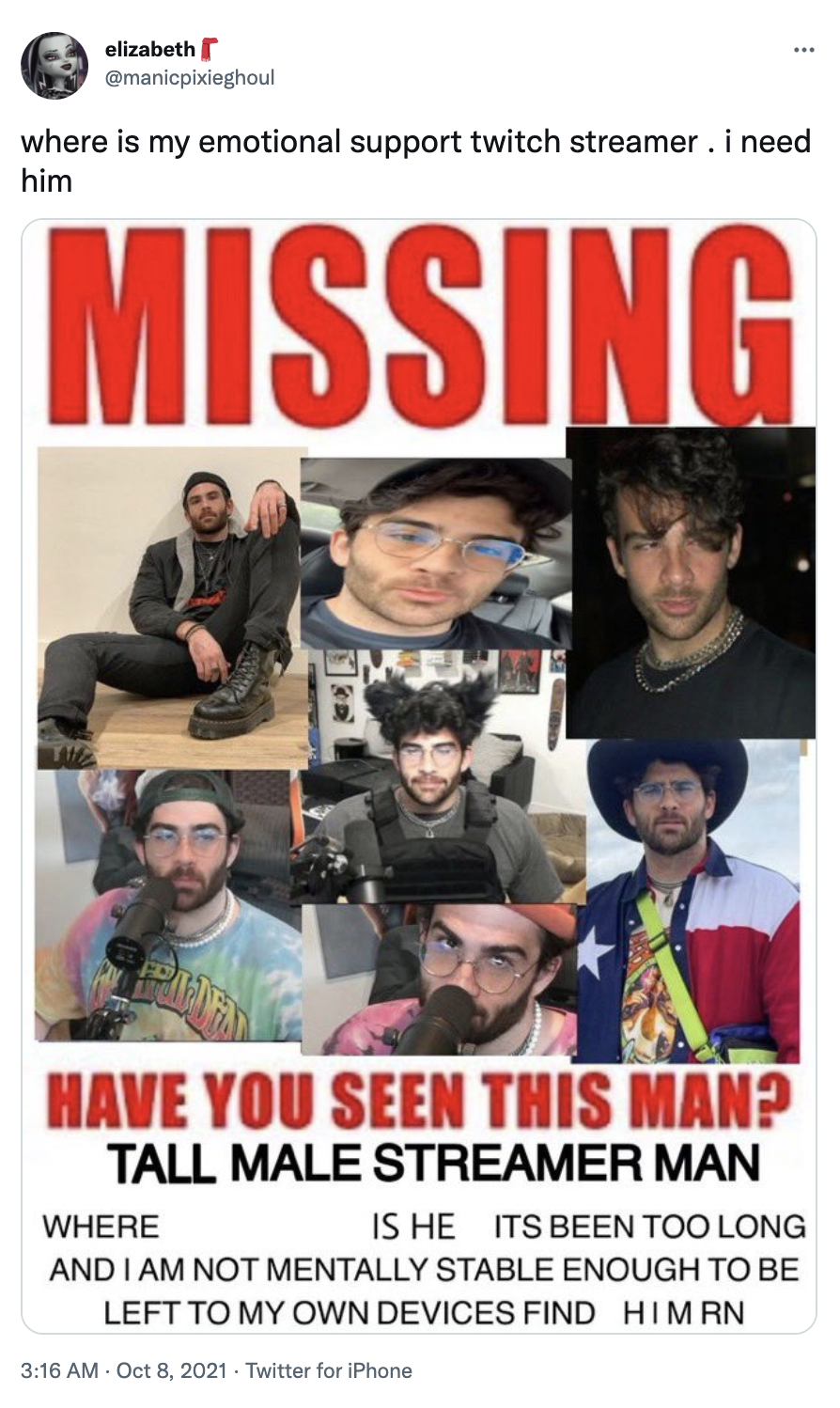 A tweet about feeling distressed and empty when a livestreamer has not been streaming. Screenshot taken from Twitter.

The possibility of being reciprocated by the streamer in a livestream might deepen the access viewers think they have to their personal life.

Trauma dumping on a livestream chat is another indicator of having an unhealthy parasocial relationship with a streamer. It occurs when viewers start seeing the streamer as a friend who can and should listen to their problems. 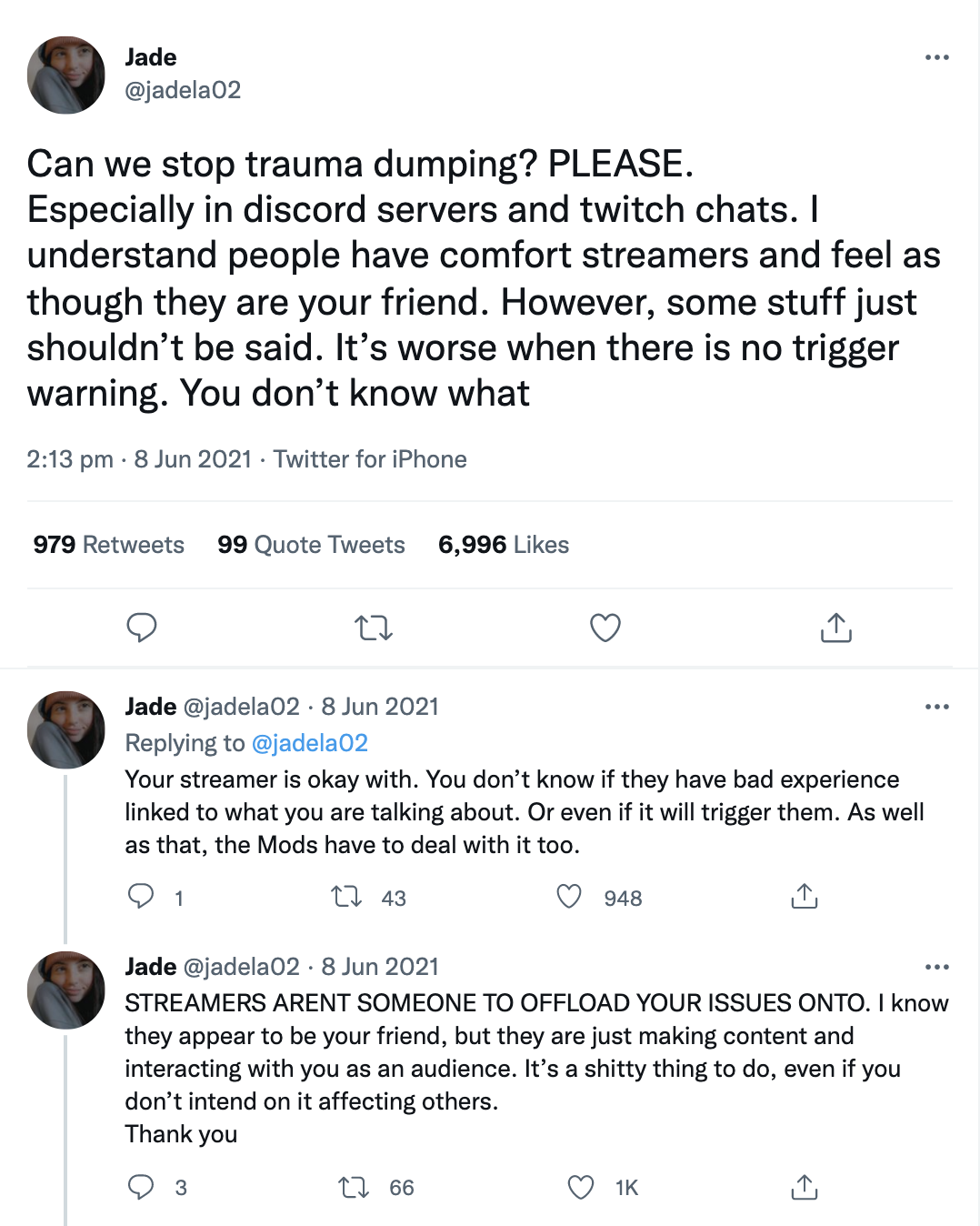 ​​In a platform where streamers have minimal control over what is sent into the chat, they might be exposed to unwanted emotional or mental triggers evoked by trauma dumps. This can cause unsolicited emotional distress for the streamer.

When emotionally invested in a celebrity or online persona, one may even feel hurt and betrayed when the persona gets ‘cancelled’. The attachment one feels to the persona can make the shattering of their image hard to reconcile with a fan’s rosy perception of them.

The rise of livestreaming and the increased need for social interaction have accelerated the nature of parasocial relationships amid the pandemic.

Online interaction with media personas is now more intimate than we ever could have imagined with livestreaming, where communication is transactional and can be two-sided.

People are now able to connect with media personas on a deeper level and form wholesome communities, all without ever meeting them physically.

While parasocial relationships are normal and can even have a positive impact on one’s well-being, they should not replace in-person relationships and interactions, but instead complement them.

Respecting each person’s privacy and being gracious are steps we can take to become more responsible online. Only then can we reap the most benefits from the opportunities the Internet has provided us to connect with one another meaningfully.