Go On, Take Everything: The Importance of Hole’s Live Through This

Witch-hunted over the suicide of her husband, Courtney Love releases an unforgettable, compelling album filled with feminine rage and anguish just four days after his body was discovered. Gabrielle Ang drops the needle on Live Through This.

The Live Through This album cover. Photo taken from Ellen Von Unwerth.

Who is this for? Every girl who’s ever felt angry in their lives. Scratch that, change it to any girl. Okay, maybe anyone who thinks that they’ve made their minds up on Courtney Love as well.

Before the death of its brightest star, rock was a white man’s world.

The genre’s most celebrated albums were by men. Whether it was Nirvana’s Nevermind, Green Day’s Dookie or darker forces such as Nine Inch Nails’ The Downward Spiral, women in mainstream rock were pretty much unseen, if not nonexistent.

Relegated to the more underground, niche ranks of the riot grrrl genre, female rock musicians rarely enjoyed the popularity of their male contemporaries.

Much like rock music, anger was also something a woman could never have. An angry woman would have been seen as unattractive, too political and overly aggressive in contrast to the desirable, sexy and submissive stars of the time.

But one woman sought to do exactly that. Four days after the tragic death of rock legend Kurt Cobain, his widow Courtney Love’s band, Hole, released their rage-filled second album, Live Through This, to critical acclaim.

The album scored a rating of 10 on Pitchfork, joining 138 other releases with the same rating. Even Generation Z popstar Olivia Rodrigo is a fan of the album, commenting: “Love u and live through this sooooo much,” on Love’s Instagram page.

“It’s keen to note that Courtney’s music came at a time when orchestration-based rock music and arena rock was at the forefront,” says Ashley Wong, 18, a music enthusiast and record store owner.

“Hole, alongside other more understated bands in the 90s, shared less popularity but appealed to me more with their heartfelt lyricism and laidback rock when others were chasing the lights… Courtney was a girl of her own.”

Of course, there was an angry mob. Think about every famous woman that’s been called a b*tch: now multiply that by a thousand, and you’ve got Love’s reputation.

Given Love’s infamy as the brash, outspoken and manic wife of a legendary rock star, the frontman of what was considered the 90s’ most influential band, Nirvana, she had become a target of the media. Love, 57, has been blamed for many things: from her husband’s death to a recent controversy with Olivia Rodrigo, much of her art has been outshined by her notoriety.

She’s also the meme-slinging, self-proclaimed “sexiest hag alive” that interacts with Gen-Z meme pages, a fierce advocate of the #FreeBritney movement and an early denouncer of Harvey Weinstein. 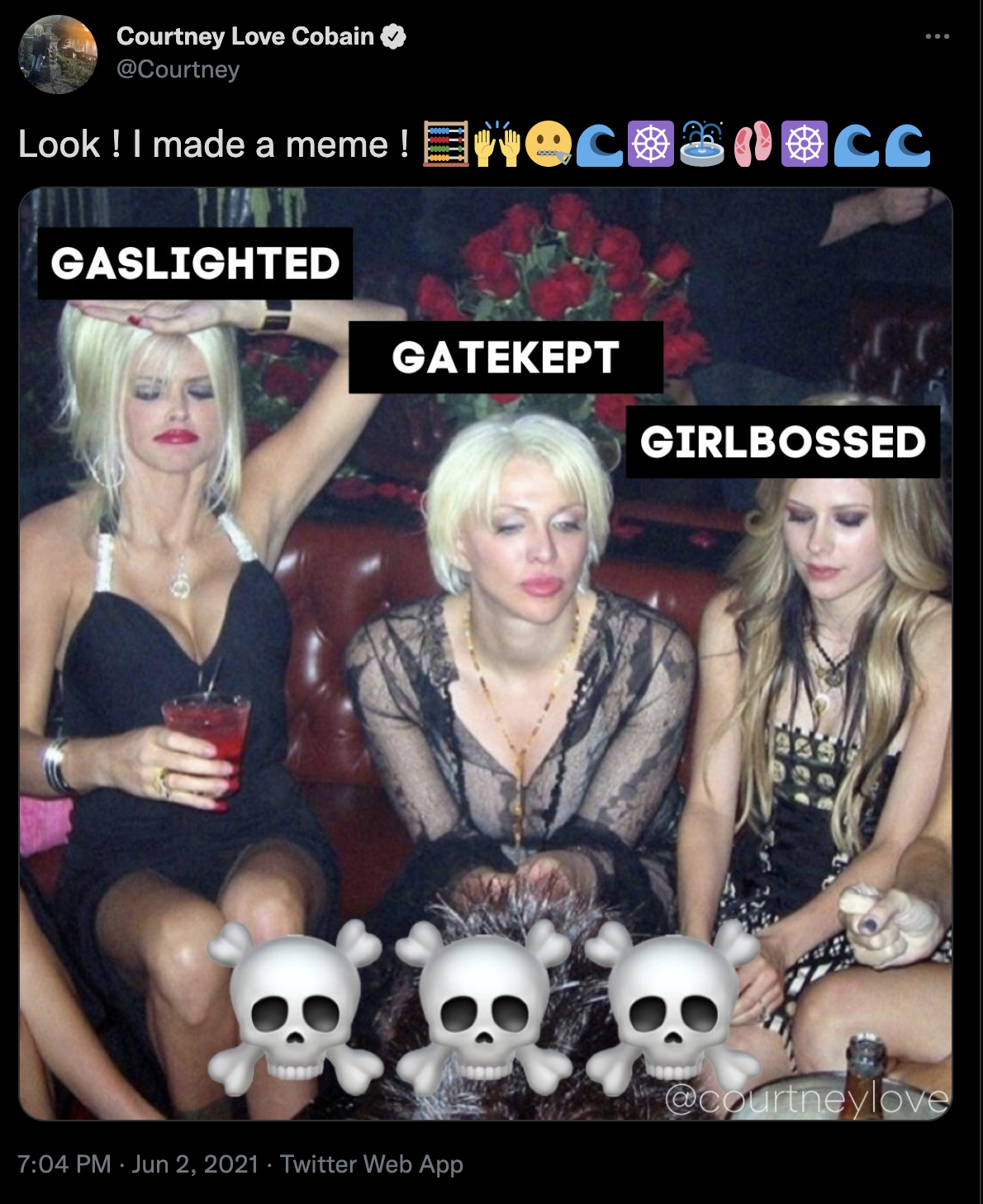 A tweet by Courtney Love, featuring a popular Generation Z meme of the late Anna Nicole Smith, herself and Avril Lavigne (from left). Photo taken from Twitter.

“While she’s seen as a rockstar of the yesteryear generation, she really carries well into the modern age,” says Ashley. “She’s also known for being adept with teenagers’ absurdist humour, which I feel like she was a pioneer of back in the 90s as well simply because she was so different amongst her other female singer-songwriter peers, [such as] the likes of Alanis Morisette or Tori Amos.”

With the mainstream media and most of her fellow contemporaries against her (Nine Inch Nails’ 1998 single, ‘Starf*ckers Inc.’ was a diss track against Love), Love would never be taken seriously as an artist in the eyes of many. It may also seem like Love is desperately trying to worm her way into the limelight. To others, she may seem like one of pop culture’s biggest trolls. That is, if you’ve never heard Live Through This.

What’s the “this” that Courtney Love wants us to live through? With tracks like ‘Plump’ and ‘Asking For It’, it’s obvious that the album’s themes revolve around womanhood and its woes. It covers everything from stardom to motherhood, to sexual assault and trauma, and it was the first time an effort by a woman in rock ever became prominent.

The album’s first track, ‘Violet’, is a defiant ode to survivors of sexual assault.

These lyrics challenge the far-too-common advice women are given to avoid sexual assault and rape.

The song remains defiant, with a screaming chorus of “Go on, take everything, I want you to”. It references a woman’s mocking, fiery stance against an abuser. As Love juxtaposes pretty metaphors such as amethyst skies and violets with violence, she sets the tone for the album: feminine, unhinged and packed with rage.

As Love juxtaposes pretty metaphors such as amethyst skies and violets with violence, she sets the tone for the album: feminine, unhinged and packed with rage.

Violet is a strong opener with a growling contralto that juxtaposes the delicate with the disgusting, and its anger, much like a banshee’s presence, is felt throughout the rest of the album.

“I’m Miss World, someone kill me”

The next song, ‘Miss World’, showcases the loneliness and mental trauma that women endure in the name of beauty, exposing the wounds that even the world’s most coveted women experience. The lyrics offer a sobering snapshot of the supermodel era long before Billie Eilish’s famous ‘idontwannabeyouanymore’ chorus. 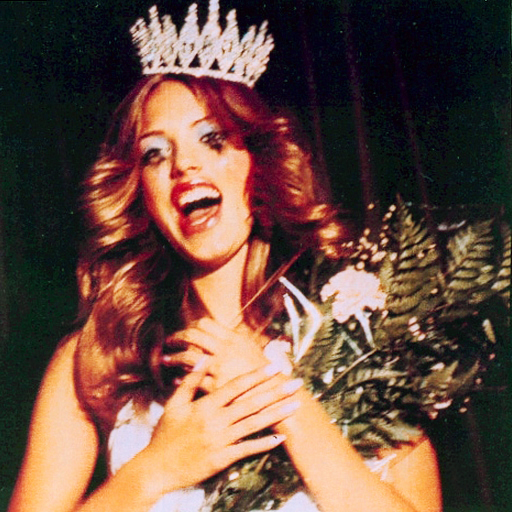 Model Leilani Bishop posing for the cover of Live Through This in 1994. Photo taken from Ellen Von Unwerth.

Just look at the cover of the album: A beauty queen laughs at a slightly shaky camera, but there’s nothing quaint or serene about her. Her makeup is smudged Joker-style, and her mouth hangs open in mad, triumphant laughter as she looks away from the camera, holding a bouquet of flowers. It’s an unsettling dichotomy of beauty and madness in one image, shot by celebrity photographer Ellen Von Unwerth.

“[I] wanted to capture the look on a woman’s face as she’s being crowned,” said Love about the album cover. “This sort of ecstatic, blue eyeliner running, kind of ‘I am, I am— I won! I have hemorrhoid cream under my eyes and adhesive tape on my butt, and I had to scratch and claw and f*ck my way up, but I won Miss Congeniality!’”

[I] wanted to capture the look on a woman’s face as she’s being crowned. This sort of ecstatic, blue eyeliner running, kind of ‘I am, I am— I won! I have hemorrhoid cream under my eyes and adhesive tape on my butt, and I had to scratch and claw and f*ck my way up, but I won Miss Congeniality!’

Love extends a hand to the insecurity that every woman feels over her beauty, and she isn’t wrong at all: From K-Pop idols to supermodels to ordinary women, many lives have been lost while yearning for beauty.

“Shakes his death rattle, spittle on his bib, and I don’t do the dishes, I throw them in the crib”

‘Plump’ jeers at the media that had criticised Love’s ability to be a good parent. Love writes about the media’s attempts to tear her apart for not behaving like a docile housewife, while objectifying her grieving, postpartum body. A critique against celebrity and media culture, she sings of the pains of motherhood under the media’s magnifying glass.

‘Asking For It’, like ‘Violet’, echoes the common sayings told to survivors of sexual assault. Written by Love after being sexually assaulted by her audience in a stage-dive, the song poses uncomfortable questions against perpetrators of abuse, as well as those who enable them.

“Yeah, they really want you, but I do too
I want to be the girl with the most cake”

Love confesses in the album’s most recognisable song, ‘Doll Parts’. Moody and insecure, the tune references Kurt Cobain’s relationship with Love and was written whilst he was still alive. With Marie Antoinette-like lyricism, a slow guitar riff and Love’s drawl-like repeats of “someday you will ache like I ache”, it’s hard to hear ‘Doll Parts’ the way it was originally intended after Cobain’s tragic death.

“I don’t really miss God, but I sure miss Santa Claus”

Mourning the loss of her innocence with ‘Gutless’, Love’s songwriting tackles faith, childhood and joy, and it chastises the riot grrrls of the time. Album closer ‘Rock Star’ is surprisingly lighthearted, and it brings her disapproval for her fellow female rockers up a notch, poking fun at the lack of originality amongst female rockers at the time.

Live Through This is sobering, beautiful and at times, terrifying. At the essence of it, Love paints an authentic experience of what women face on a daily basis. The album works as a mirror pointing towards the uncomfortable reality that women face, like salt to a festering wound.

Live Through This is sobering, beautiful and at times, terrifying. At the essence of it, Love paints an authentic experience of what women face on a daily basis. The album works as a mirror pointing towards the uncomfortable reality that women face, like salt to a festering wound.

Illustrated with equal parts of beauty and madness and supported by grungy instrumentals from Hole’s members Eric Erlandson, Kristen Pfaff and Patty Schemel, Live Through This certainly doesn’t sound like a 2020s rock album alongside the likes of WILLOW and Halsey, but it’s still worth a listen for the women of today.

“I think Courtney Love is a bit of a lovable enigma,” says Ashley. “As a girl myself, I really find her so interesting because she carries herself with a certain type of irreverence that doesn’t really happen anymore in our very glued-to-our-phones world. She’s very real, and she’s really been through a lot of things in her career which have bogged her down and brought her up, which is something I can relate to.”

Decorated with aesthetics that would impress many fans of Tumblr-like visuals, Live Through This’ art direction is filled with beautiful images of fallen beauty queens, milkmaid dresses and poignant poetry, combining a feminine aesthetic with unbridled rage. Take the stereotypically sullen Lana Del Rey fan and radicalise her and you may just get a new friend of Courtney.

Packed with addictive riffs and lyricism that may leave you pondering for the next few weeks, Live Through This proves that Courtney Love’s songwriting prowess is truly deserving of all the love in the world, so much so that this album would live through another and a lot more of this. 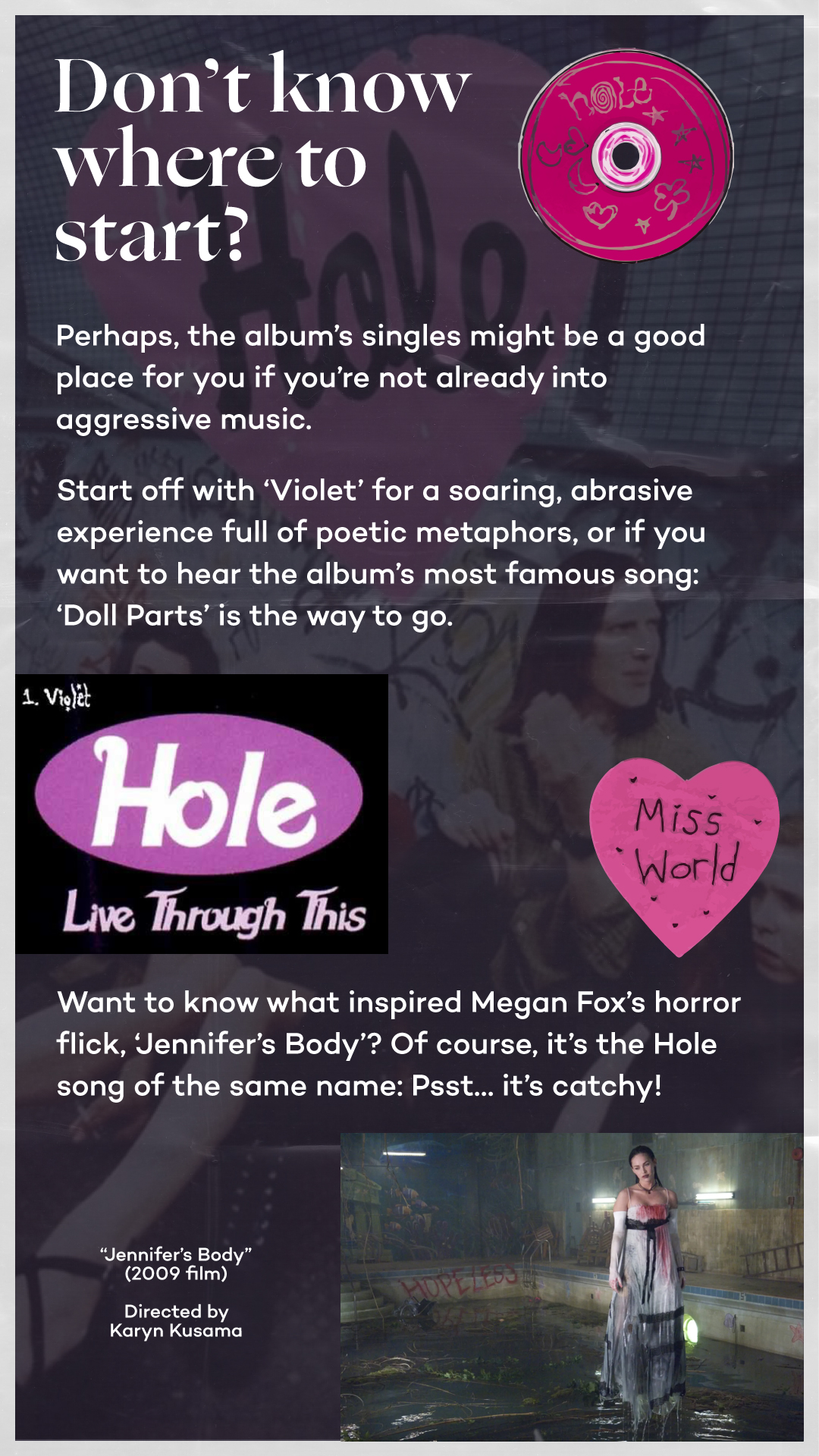 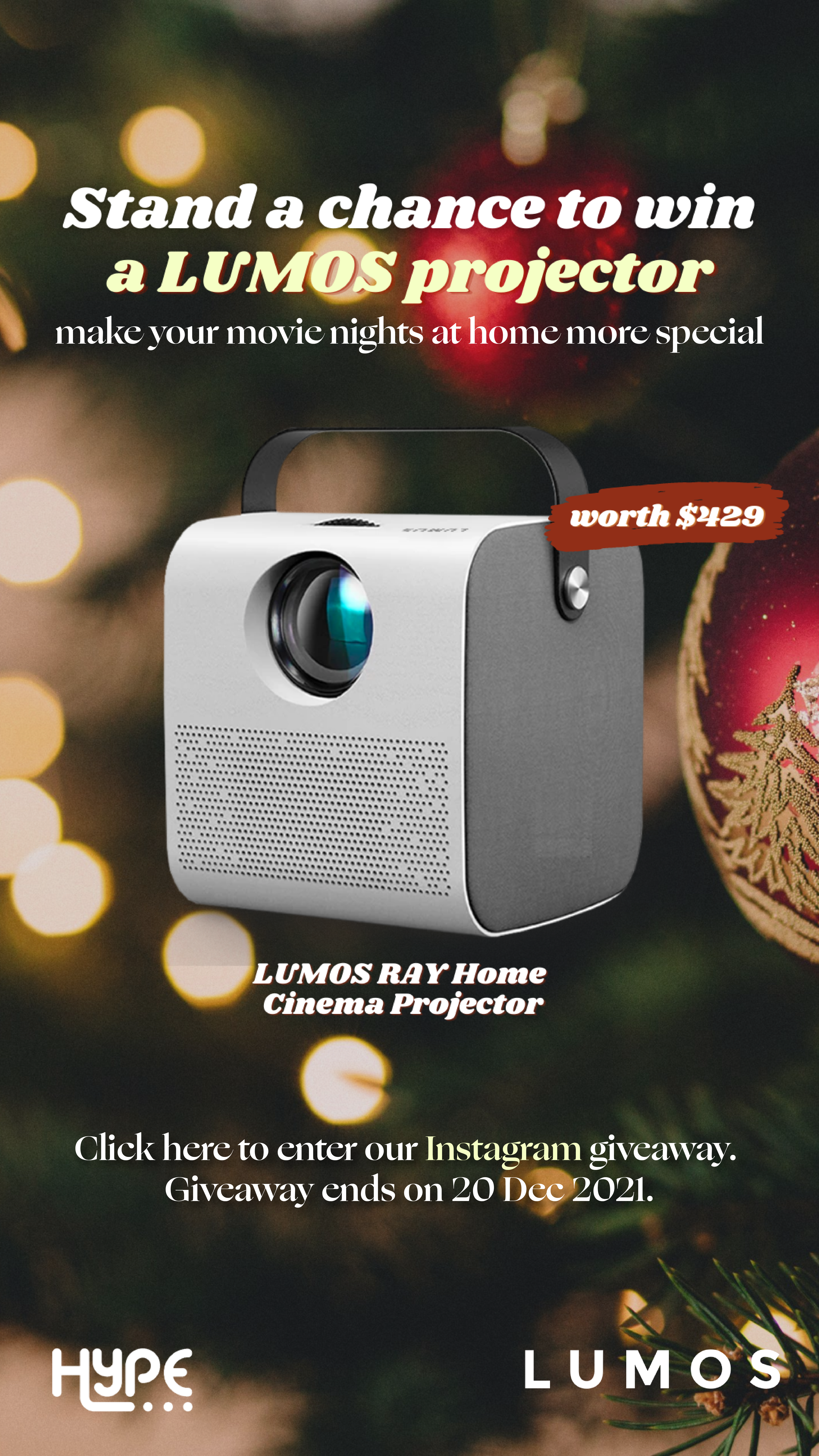