Humour Makes Me A Modern Girl

When it comes to misogyny in Singapore, women have taken things into their own hands. From infographics on the #MeToo movement to social media exposés of predatory men, most famously a controversial Excel spreadsheet, Singaporean women have found new ways to fight back.

In the case of Instagram meme page owners Yap Yu Tong, 20, and Internet Dog, 26, it’s humour. Female-centric meme pages are rare in Singapore, with most being told from a “male-centric, or gender-neutral” perspective, according to Yu Tong.

Yu Tong, who is the owner of @yourgirlfriendiswhosia, arguably the most notable female-centric meme page in Singapore with over 44,000 followers, goes for a more general approach in the page’s appeal to women. She jokes about breakups, 2010s throwbacks and cheesy millennial weddings, but isn’t afraid to stand up against toxic masculinity in Singapore, either. 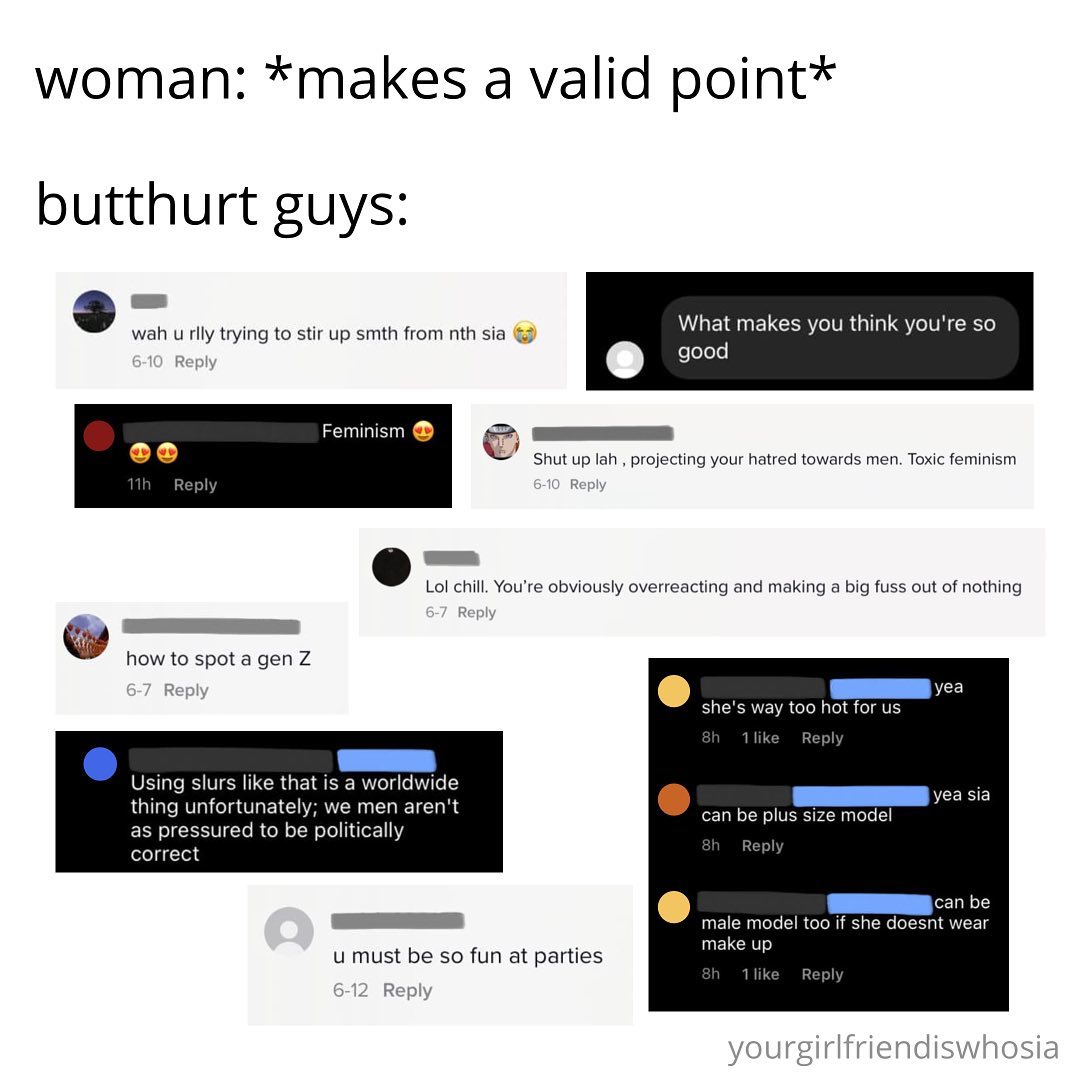 Examples of memes created by Yu Tong for @yourgirlfriendiswhosia. The first meme references this molestation case, while the second features examples of some of the derogatory comments targeted at women by men. Images from Instagram.

“There’s a post I made about red flags, about guys using slurs. And I think those are important things to cover,” said Yu Tong. “Because there are some people who are not aware that these are red flags, so in a way it is to educate women within the dating space about things that they should be aware of.”

Because there are some people who are not aware that these are red flags, so in a way it is to educate women within the dating space about things that they should be aware of.

“I also made posts about people that you should be aware of on Tinder and Bumble because they’re people who are trying to sell girls’ nudes. I think it’s mostly to raise awareness about women-specific issues that we face when it comes to interacting with guys,” added Yu Tong.

Similarly, Internet Dog formed Rabak Tinder in 2019 with a group of friends that we can only refer to as the ‘Internet Farm Animals’, due to a doxxing scare which led to its members taking occasional mental health breaks.

The page showcases various screenshots from the popular dating app, Tinder, which has been described as rabak by the group, a Malay slang term meaning “out of hand”. The screenshots include bios and text messages on the app, which range from desperate or cringey to straight-up misogynistic. 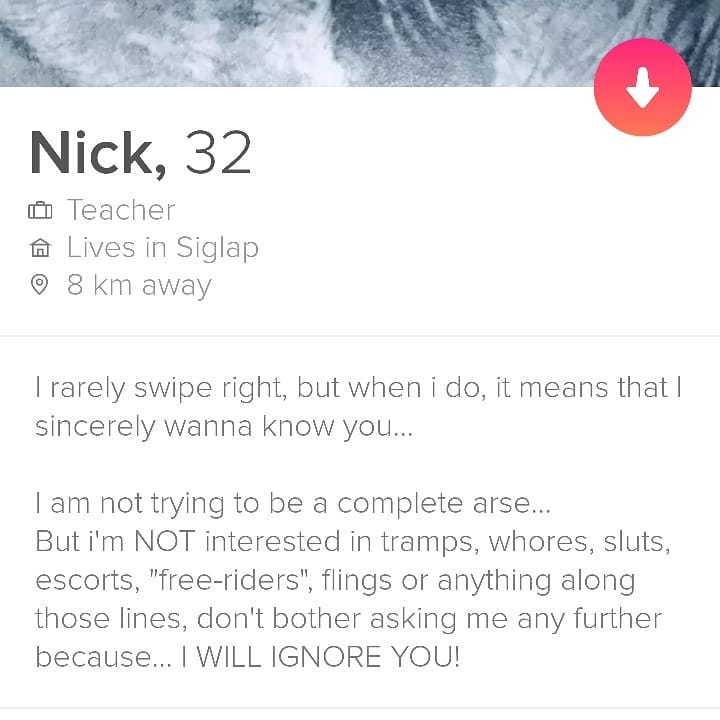 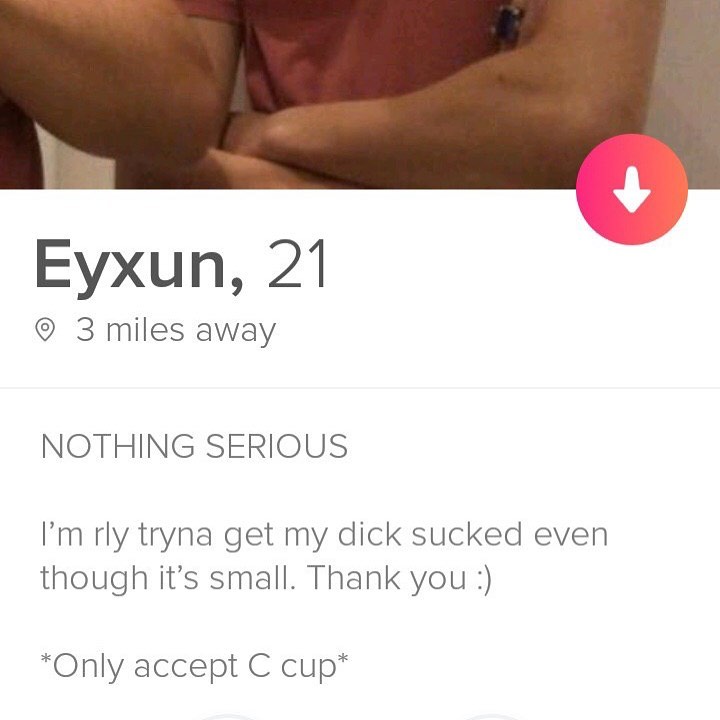 Examples of the profiles featured by @rabaktinder. Images from Instagram.

“I guess we were very inspired by @beam_me_up_softboi, which was based in the UK. We wanted to localise that kind of content and apply it to a Singaporean context,” said Internet Dog.

“We wanted to take the opportunity to create a meme page for your swipes. I was like, I’m so tired of swiping people, let’s just make fun of them.”

We wanted to take the opportunity to create a meme page for your swipes. I was like, I’m so tired of swiping people, let’s just make fun of them.

Both pages poke fun at some of the most repetitive traits of Singaporean men on dating apps, for example: enjoying generic acoustic music, basing their sense of humour off of popular TV shows such as Brooklyn Nine Nine and The Office and dressing down while women try their hardest to look their best for dates.

Internet Dog recounted an instance where she and a straight male friend switched Tinder accounts, and he had found the collection of men ridiculous in comparison to the women, who had mostly put in more effort into their profiles.

“Rabak Tinder is definitely relatable in that sense, because like everybody would have probably seen one of those profiles with their music taste revolving around Ed Sheeran or Maroon 5,” said Internet Dog. “But it’s way worse when people’s bios can be misleading and threatening. And incel-ish. You’ll be concerned for your own safety, even from a simple bio page.”

However, to her chagrin, some of Rabak Tinder’s followers believed that the admins were male.

“A lot of people doubt us when we say that we are women. I mean it’s obvious when you see that most of our swipes are men right? But like, people still don’t believe it because our humour is funny. They don’t believe that women can be funny,” said Internet Dog.

A lot of people doubt us when we say that we are women. I mean it’s obvious when you see that most of our swipes are men right? But like, people still don’t believe it because our humour is funny. They don’t believe that women can be funny.

A quick Google search with the rather neutral term “women and humour” suggests that women were simply not made to be funny, and that comedy was better off left to men. 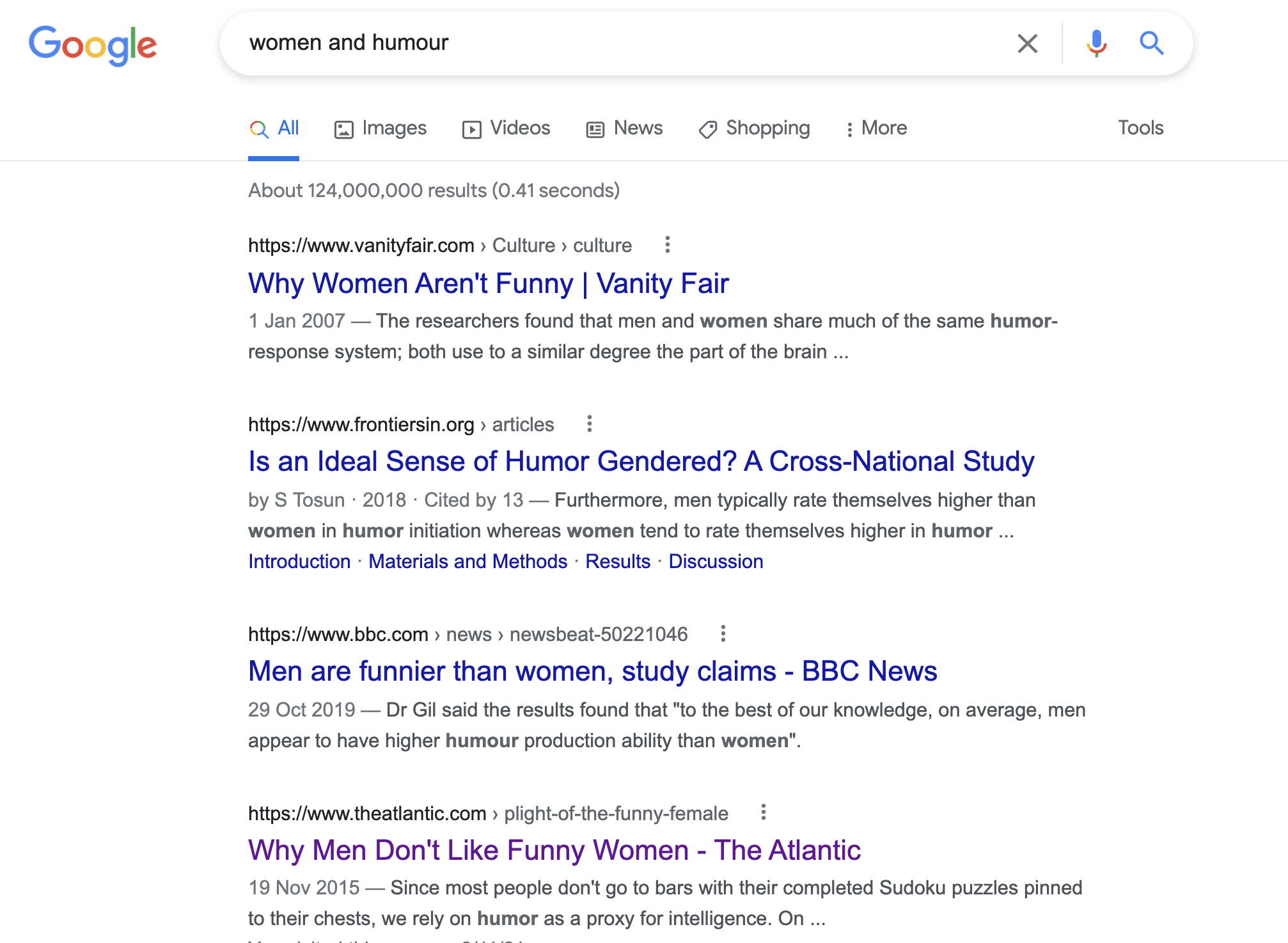 A screenshot of a Google search for “women and humour”. Screenshot from Google.

Perhaps, that could be the reason why there are fewer female meme pages in Singapore?

Surely, it could not be that Singapore wasn’t ready for more women to create girly memes. Both pages’ audiences have mostly remained supportive. Social engagement on both pages have been healthy, even with the occasional troll. Fans have even submitted their own experiences to both pages, which try to affirm the unique experiences of women using humour.

A @yourgirlfriendiswhosia follower’s screenshot of a man fat-shaming her on a dating app. Image from Instagram.

On whether they think people will see them as Social Justice Warriors, or SJWs for short, they’re not worried.

“At the end of the day, it’s still a meme page,” said Yu Tong. “And I would want to retain that humour. I don’t want to make it a very social or political page, because I think the main purpose of my page is to provide humour. There are certain times where I will talk about important issues, but I don’t want that to be the main focus.”

“If you’re offended by the content, you’re possibly part of the problem,” said Internet Dog.

There’s a lot that we can afford to learn from women’s satire, in a world where we still say that “boys will be boys”. And no one’s kidding about that.